Most would agree November is not the ideal month to whiz down Maryland roads in a convertible with the top down. But one Thanksgiving holiday Jim Miller, A&S '64, and Doug Harper, Engr '66, found themselves cruising al fresco, trying to keep warm in a two-seater car despite the raw air. They'd driven to Westminster, Maryland, to pick up Joyce, the young woman who would become Miller's wife, from what is now McDaniel College and drive her back to her family's home in Baltimore. For all three to fit in the car, they needed to put the top down while Joyce perched on the armrest between the driver's and passenger's seats. Decades later, they still laugh about their unconventional ride. 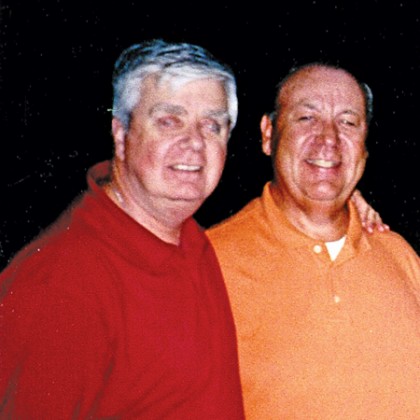 Their friendship traces back to their Johns Hopkins undergrad days, when Harper was a freshman and Miller a junior. The rush chair for Sigma Phi Epsilon at the time, Miller encouraged Harper to pledge. Harper did, and he's adamant that the decision was one of the best he has ever made. Harper, Miller, and their fraternity brother Bill Day, Engr '66, went on to rent an off-campus apartment together for $125 per month. They remember telling the landlord that if he gave them supplies, they'd paint the apartment for him. When the landlord complied, the roommates called up Goucher College and Notre Dame of Maryland University—the places where they knew girls—and invited people over for a painting party. Word spread, and more than 30 people showed up to get the job done.

That summer, Miller invited Harper to live at his parents' home so they could both work for Bethlehem Steel. The Millers embraced Harper, even allowing him to use their garage to tear apart and rebuild the transmission in his '49 Ford. Those months solidified the friendship. "It's one of those things that happens without being something that you try to make happen," Miller says. "It develops because you realize this is a person with whom you can spend time and enjoy their company, enjoy their intellect."

Miller went on to practice law and raise three daughters in Connecticut. Harper built a career with IBM and resides in Maryland with his wife; they adopted two children. Both graduates remain active in the Alumni Association; Miller founded and led the Connecticut chapter and was elected to the Alumni Council in 1996. He nominated Harper to the Council in 2002, and Harper served until 2008. They still make time for one another, be it seeing Jersey Boys on Broadway, attending an Alumni College on Maryland's Eastern Shore, or chatting via phone.

To one another, they're family. "To be honest with you, I view Jim as my closest relative," says Harper. "He's my brother," Miller agrees. "Not just my fraternity brother. He's my brother."