Standing at the peak of a dormant volcano on Hawaii's Big Island, a group of Johns Hopkins alumni and their spouses gathered around a 73-foot telescope, gazing at the sunlight bouncing off its gigantic 8.3-meter-wide mirror. The group had ascended nearly 14,000 feet above sea level to the summit of Mauna Kea, where a mild climate and clear skies create ideal viewing conditions for astronomers, to see the Subaru Telescope, one of the world's largest. Staff tipped the telescope so alumni could take pictures of the mirror, which helps astronomers map the sky in fine detail, and let them wander through the normally off-limits rooms where they store and refurbish cameras and spectrographs. 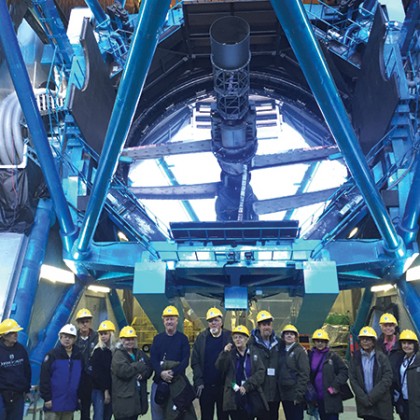 Since 1972, the Johns Hopkins Alumni Journeys program has turned Johns Hopkins alumni into travel companions, bringing groups to exotic and adventurous destinations, including Cuba, South Africa, Alaska, and Italy. The program, which organized December's Hawaiian getaway, offers roughly 30 trips annually. Many trips include faculty lectures, where leading experts share insights about the historical, scientific, or cultural background of a destination.

In part, the weeklong Hawaii trip highlighted astronomical research. For one of his lectures, trip leader Timothy Heckman, chair of the Department of Physics & Astronomy, focused on the Prime Focus Spectrograph project, an $80 million effort of Johns Hopkins University, the National Astronomical Observatory of Japan, and eight other institutions. Paired with the Subaru Telescope, the new spectrograph will allow astronomers to look at thousands of galaxies simultaneously and create a census of the universe over time that is more precise than ever. "You can identify the age of what you're looking at, what it's made of, how far away it is," Heckman says. "The goal is to understand how we got here and what our ultimate destiny will be." Through these talks, retired orthopedic surgeon Scott Starks, A&S '74, says Heckman "was able to explain astronomy in terminology that we could relate to."

The Hawaii trip also showcased the beauty of the Big Island's rainy east coast. "You had all the cliffs and vines, multicolored birds and insects, and there are flowers everywhere, any time of year," Starks says. Local guides led field trips to the Tropical Botanical Garden and Volcanoes National Park. At the park, home to two active volcanoes, Don Swanson, A&S '64 (PhD), former scientist-in-charge of the Hawaiian Volcano Observatory, met with the group to talk about the forces that created the volcanoes.

Later, over pork and papaya, the group talked about getting together for a Johns Hopkins lacrosse game in the spring. Starks couldn't help but notice how at ease the group members were with one another. "You can go on a tour with a bunch of strangers and never have that one thing to get back to," he says. "The fact that we went to Hopkins, it forms a bond."