Urban agriculture can refer to private backyard vegetable plots, community gardens, high-tech food-growing operations on rooftops or within high-rises, and food production on the outer fringes of suburbia. It's a hot topic of late, much lauded by civic leaders who see "city farms" as a powerful intervention for downtrodden neighborhoods. If so, the food grown in cities may turn out to be less important than the growth in community cohesion and cooperation. The peppers and potatoes may matter less than the people.

That's one conclusion of Vacant Lots to Vibrant Plots: A Review of the Benefits and Limitations of Urban Agriculture, released in April by the Center for a Livable Future, an academic center at the Bloomberg School of Public Health. The report provides an overview of the sociocultural, health, environmental, and economic development outcomes of urban agriculture. 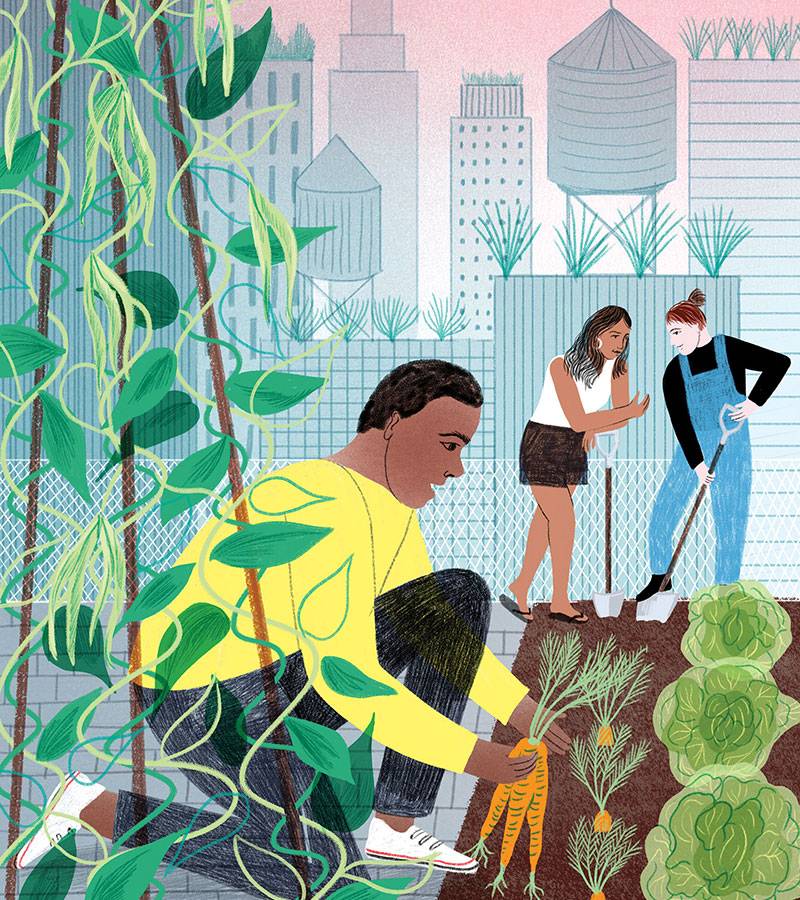 "In most cases, the volume [of food] coming out of these gardens and their seasonality limit their ability to serve as regular sources of food," says Anne Palmer, director of the center's Food Communities and Public Health Program, who co-authored the study along with CLF colleagues Raychel Santo and Brent Kim. Urban food production can benefit areas underserved by supermarkets or other sources of fresh produce. But more significant benefits arise from a community coming together. The report cites several studies that show city agriculture enhances social capital through "increasing the social bonds and networks among neighbors, among people from more diverse backgrounds, and among those in different positions of power. Such connections, based on mutual trust and reciprocity, offer support during times of crisis and help communities leverage greater resources, funding, and supportive policies from outside organizations and government. They also bridge gaps, reduce existing tensions, and foster social integration between otherwise segregated groups by bringing together people of diverse races/ethnicities, cultures, religions, socioeconomic classes, genders, ages, and educational backgrounds to participate in shared activities with a common purpose."

So the community is strengthened; fresh veggies are a side benefit. Says Palmer, "We didn't want to do this to throw a wet blanket on urban agriculture so much as to extol the benefits that we know exist and try to understand them a little bit better."

The growth and potential of these projects can be limited by a lack of local participation. Many urban farming projects have been initiated by institutions outside the neighborhoods, with good intentions but unintended consequences. Says the report, "A number of case studies have found that urban farms and gardens—both for-profit and nonprofit—have been led by mostly young, white nonresidents in predominantly black and/or Latino neighborhoods, unintentionally excluding people of color from participating in or reaping the benefits of such efforts." Adds Kim, "Residents can be distressed by external efforts—people coming in to quote-unquote 'improve their neighborhood.'" Securing community involvement at the start is key. Kim gives kudos to an agriculture project in inner-city Baltimore where, long before the first shovel hit the dirt, the organizers knocked on every door in the surrounding neighborhoods seeking input, support, and participation.

Other benefits of urban agriculture are less complicated. Urban beautification, for example. Farm plots improve local ecosystems by filtering airborne pollutants, moderating temperatures, and helping to control stormwater runoff. Planting different varieties of food crops promotes biodiversity. Urban farms can also provide educational benefits and job training opportunities, though they are not likely to create many living-wage jobs. "There simply isn't a one-size-fits-all approach that's going to get us to a healthy and sustainable food system," Kim says. "But I think we do view urban agriculture as one of many potential interventions that can get us where we need to go."