Investing is personal for Paul Grossinger 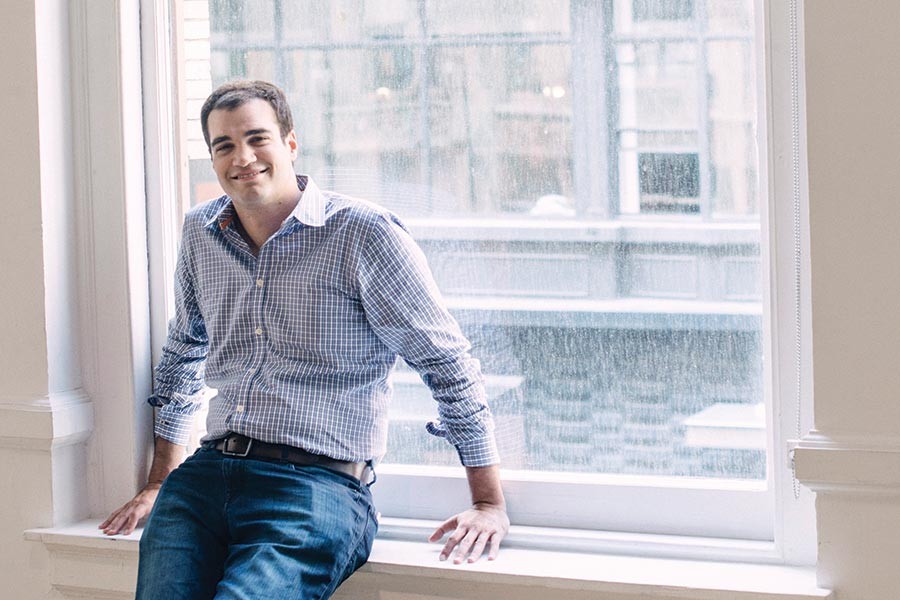 Image caption: Some people call Paul Grossinger’s investment style “go-with-the-gut,” but he says it’s his philosophy to pick the best people and “let them figure things out.”

Paul Grossinger's job sounds complicated when he tries to describe it. He says he's a tech entrepreneur. And an early-stage angel investor. And a business adviser. And, perhaps most significantly, a networker, with a knack for introducing the right people.

Grossinger, now 27, found early financial success via a network of sports websites he started as an undergrad and subsequently sold. He also proved to be a savvy investor in bitcoin. Hoping to help other entrepreneurs get their companies off the ground, he founded not only Gaingels but also Blue Jay Syndicate, an investment group for businesses started by Johns Hopkins alumni. He also serves as an adviser for A-Level Capital, a student-led venture firm that invests in early-stage companies founded by Johns Hopkins students and alumni.

Why do you think affinity-based investing networks like Gaingels and Blue Jay Syndicate have become so hot in recent years?

Affinity investing is a term that's being used now for something that's been going on for 2,000 years, which is basically groups that share a community wanting to help each other. The power of that is when people are connected by an affinity—LGBT and alumni groups, for example—they are flat-out more willing to help one another. They don't take into account their own importance versus someone else's ("My time is valuable, and this person's is not") the way they might in their normal social discourse. Somebody who sold a company for a billion dollars is infinitely more likely to serve on a board of a seed company when they share a common bond.

How did Gaingels come about?

A colleague and I launched it with 25 gay New Yorkers who wanted to support companies that have a gay founder. We thought we'd pool some money and do some cool stuff, but it's evolved. Our members were willing to take the extra time to meet, engage, sit on boards, or, in some cases, even join companies. I said, "If we can do that with 25 people in New York, what can we do with a global network?"  [Gaingels now has members in New York, San Francisco, London, Los Angeles, and Tel Aviv.]

What do you look for when you're considering funding a company?

I want either to know the people directly or know other people who know the people well, ideally for years. If they have worked with them before too, it's a huge plus. I also consider whether my network can amplify their chances of being successful. I don't spend a lot of time on business plans, financial models, projections. That's useless to me at such early stages. I do want to understand where they want to take the business and why they think it's unique, but generally that's less of a focus than the people themselves. Some people call this "go-with-the-gut," but I actually see it as very analytical and philosophy-driven. My philosophy is to back the absolute best people, let them figure things out, and amplify their capabilities as much as possible.

What are some common mistakes you see startups make?

One is that a lot of younger entrepreneurs focus on owning as much as they can of the company, and that's very short-sighted. To really penetrate markets, it's important to have a great group of advisers and investors and board members. The second mistake is they really underestimate the difficulty and length of time it takes to build a great company. At the same time, many also overestimate the amount of time they have to prove that their idea is valid. If something isn't taking off after the first two years, you probably should move on.  So many founders hang on, always expecting their next update or product release will pivot everything around. I have yet to see that happen once a certain point of time has passed.

Have you had many good investments go bad?

Sure. There are a lot of them. That said, I think I've learned more from the mistakes I've made, both in terms of individual companies and much larger ventures, than from the successes. So I don't really regret them. I've learned so much from all the dumb things I've done.

Can you give an example?

Can you give an example of a recent investment by Blue Jay Syndicate?

A group of members is investing in Maggie Louise Confections, the chocolate company where Kevin Callahan, Engr '99, is chief operating officer, because we know Kevin and we respect what he did with his previous company, MapMyFitness. Any time I know someone and like their capabilities, I'm going to fund them, even if they're doing something I don't understand at all. And I don't know anything about chocolate.

Where do you see Gaingels and Blue Jay Syndicate in 10 years?

I don't ever think 10 years ahead. That's an unfathomable amount of time for me. I do know that in 10 years I want to be helping the communities I care about, specifically the LGBT, Jewish, and Johns Hopkins communities. Those are the three causes where I will always invest my time, energy, and money.