Studying music as the prescription

The University of Pennsylvania's Parkinson Disease and Movement Disorders Center periodically hosts a retreat for its patients, an escape from the humdrum of treatment. At a retreat in 2013, the center invited a group of West African drummers to lead a 45-minute class. The patients gathered in a circle. Each straddled a traditional goblet-shaped djembe drum and followed the lead of the instructor, who set the rhythm. Johns Hopkins neurologist Alex Pantelyat, then a fellow at the center, says the group made quite a racket, but what stood out was the patients' reactions after the class. Unsolicited, they all reported a reduction in their symptoms. They walked more easily. Tremors seemed to subside. They were in better moods. "I thought, we can't ignore this response," says Pantelyat, who is now director of the Johns Hopkins Atypical Parkinsonism Center. He helped design a pilot study that involved twice-weekly drumming classes for 10 Parkinson's patients over a six-week period. The results, published last year in the journal Movement Disorders – Clinical Practice, showed that the classes improved the quality of life for the participants.

Pantelyat strongly believes that music has the power to heal more than Parkinson's patients. The Johns Hopkins Center for Music and Medicine, which he co-directs, hopes to accelerate research in this nascent field.

Alongside its mission to heal musicians, the center will explore how to make music an integral part of treating illness and develop therapies that improve quality of life for stroke victims and those with Alzheimer's, Parkinson's, autism, and other diseases. It also hopes to create innovative roles for performers in clinical settings. The center will support ongoing projects like Parkinsonics, a study led by Pantelyat to evaluate the effect of group vocal training and performance on the quality of life for Parkinson's patients, whose voices frequently become softer and speech less distinct, and who have trouble swallowing, as the disease progresses. When a person sings, Pantelyat says, he activates muscles involved in both the act of speaking and swallowing.

Pantelyat, who has played the violin since age 7, says the evidence of music's restorative and therapeutic properties is already compelling. He points to research published last year in The Lancet that showed that listening to music before, during, and after surgery reduces a person's pain and anxiety, and the need for post-operative painkillers. In Alzheimer's patients, music has been shown to stimulate memory and reduce agitation. MRI-based analysis of brain patterns just before and during the playing of a favorite song has shown the activation of both the brain's pleasure and reward systems. "We are just now scratching the surface of the mechanisms behind all of this. It's incredible how little we know," he says. "Combining music and medicine is not new, but there is a big void in our understanding of how these two can interconnect to relieve a lot of suffering." 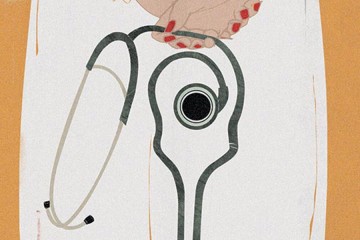