For decades, water has been seeping into the floors below ground level in one of the oldest buildings on the Homewood campus, Krieger Hall. Now, a major renovation project is underway to fix the problem, replacing the waterproofing system on the north side of the building. At the same time, the colonnade between Krieger and Ames halls—which spans the area known as the breezeway—will be dismantled, waterproofed, and reconstructed. 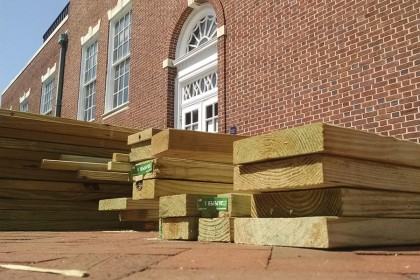 Johns Hopkins hired engineering firm Simpson Gumpertz & Heger to conduct a study, which determined that Krieger Hall's waterproofing system—built more than 87 years ago, during the building's original construction—needs to be replaced. The firm also discovered water damage to the adjacent colonnade. The north side of the building will be excavated to a depth of 27 feet, creating a trench approximately 20 feet wide and 200 feet long. The ramp from Keyser Quad to the second floor of Krieger Hall will be removed and replaced at the end of the project. A significant portion of Keyser Quad will be fenced off and used for materials storage and deliveries during the project, and the breezeway will be closed.

The Krieger Waterproofing and Colonnade Restoration Project is expected to be completed in August 2017. In the meantime, schools, departments, and student organizations have prepared to use alternate locations for activities that usually occur on the quad, including the annual Lighting of the Quads in December.