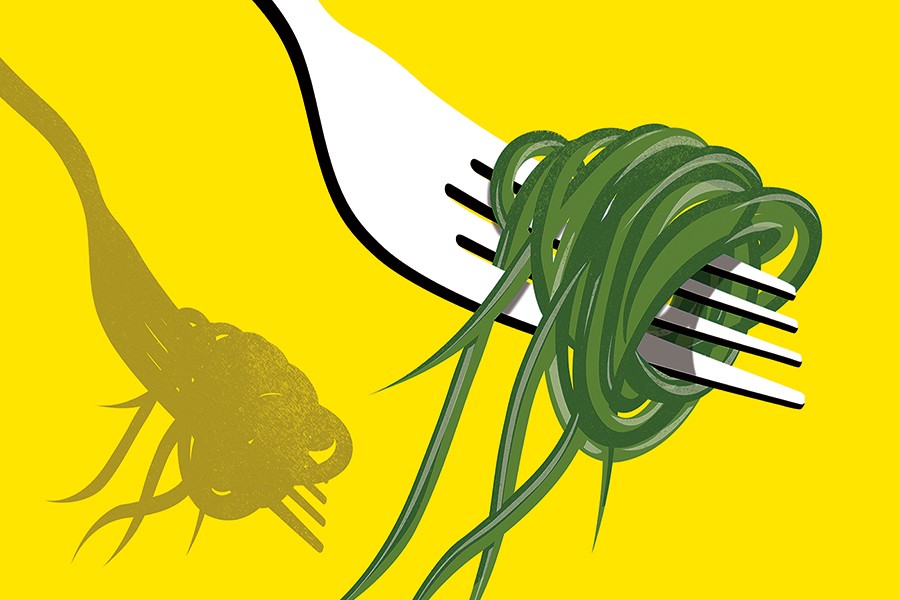 In August 2012, Naomi Levin boarded a plane from Addis Ababa, Ethiopia, to Baltimore with ground-up teeth in her carry-on. The teeth were fossils found at the Woranso-Mille paleontological site in Ethiopia. An assistant professor in the Krieger School's Department of Earth and Planetary Sciences, Levin had joined scientists there investigating Pliocene-epoch hominids, precursors to modern humans. Now, luggage in hand, she wanted to get the powdered teeth back to her lab to run them through a mass spectrometer and analyze the carbon isotope data. Because the body uses carbon in foods to build teeth and bones, the carbon that remains in teeth—even extremely old ones—can indicate what the owners had eaten long ago.

Once Levin ran the tests, she was intrigued by her findings. The hominids, who scientists had believed subsisted on what could be gathered from trees and shrubs, had also been eating grass-based foods as far back as 3.8 million years—about 400,000 years earlier than previously believed.

Published in the Proceedings of the National Academy of Sciences in September, Levin's report is significant to the understanding of human evolution because it implies that hominids were dietarily versatile, and thus able to change environments, much earlier than once thought. Co-author Yohannes Haile-Selassie, principal investigator of the Woranso-Mille project and head of physical anthropology at the Cleveland Museum of Natural History, sees this versatility as a key to human success over the ages. "This is where we see hominids start being generalists [in what they eat], and this is what was probably the key for their success down the line, to actually survive throughout the bad times and good times," he says. "We have some closely related hominid types which were highly specialized to certain types of food, and they were not successful. As soon as the resources dwindled, they had no choice but to go extinct."

"This is a mammoth step forward in terms of understanding how early humans ate," Levin says. Timing is important for everything in evolution, she adds, because scientists can correlate an identified evolutionary event with others, such as when humans became bipedal, developed larger brains, began using tools, or started to migrate.

Levin collected the teeth in her analysis from the National Museum of Ethiopia in Addis Ababa. She selected samples from 152 teeth, about 16 of which belonged to hominids, picking broken specimens of little value to the museum. She drilled at the teeth, put the resulting powder in vials, and meticulously labeled and photographed the samples before carrying them home. Back at Johns Hopkins, Levin analyzed the distribution of carbon isotopes in the teeth, which told her whether they had chewed grasses or trees and shrubs. Some of the teeth were from a contemporaneous species of baboon and revealed that those now-extinct primates had expanded to a grass-based diet at the same time. To factor in possible changes to the environment, Levin compared the Woranso-Mille soil with soils from other places. She found no evidence of a large-scale environmental shift, like climate change, at the time of the hominid and baboon change in diet. That is, they did not have to adapt because new foods had suddenly shown up or their accustomed foods had become scarce. Instead, she attributes the switch to ecological factors—perhaps a new species entering the scene and causing a massive shakeup.

While the dietary breakthrough is exciting, the work is far from complete. Filling in other gaps in the early human story will occupy scientists for years, Levin says. "Something happened in the past, and that's a very concrete thing to recognize. It's up to us to crack the codes, and that's where the fun comes in."