Measuring an enzyme's effect on chromosomes 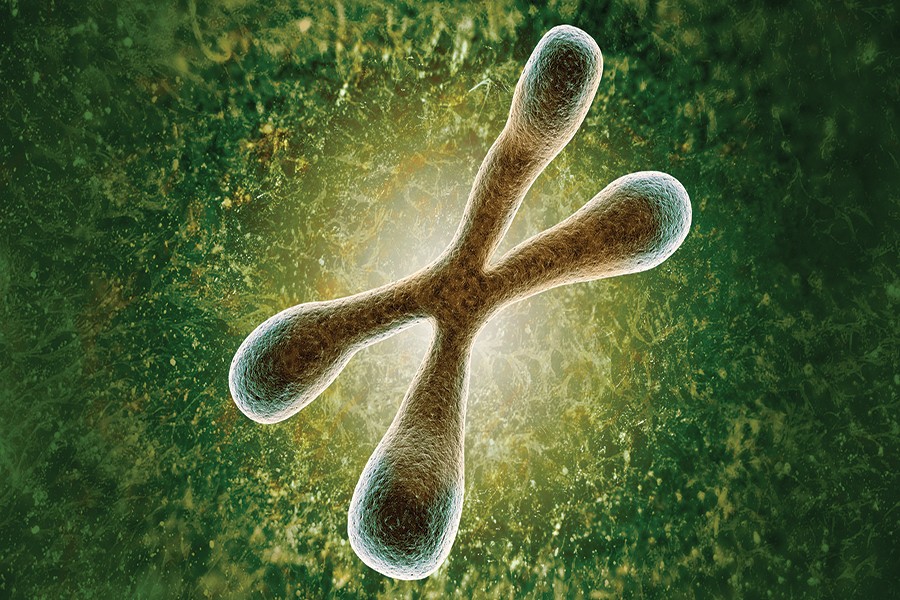 Image caption: Telomeres are the caps, here in green, on the ends of chromosomes.

TITLE: ATM Kinase is required for telomere elongation in mouse and human cells

ATM stands for ataxia telangiectasia mutated, a gene that contains information for synthesizing a protein that controls the rate of cell growth. When the strands of DNA in a cell become damaged, the ATM protein coordinates repair.

Kinase is a type of enzyme that regulates the function of proteins to modify complex cell processes. Scientists knew ATM kinase played a role in DNA repair but were not sure if it also affected telomere lengthening.

Telomeres are repetitive sequences of organic molecules that form protective caps on the ends of chromosomes. Over repeated divisions of a cell, the telomeres shorten, and this shortening imposes a limit on how many times a cell can divide. Because cells with short telomeres die, shortening limits cancer-cell growth but also the growth of normal stem cells, giving rise to age-related degenerative disease.

An enzyme called telomerase lengthens telomeres, counteracting the shortening effects of cell division and thus prolonging the life of a cell. It's fair to say no one knows more about telomerase than molecular biologist Carol Greider, a Bloomberg Distinguished Professor who was a co-recipient of the 2009 Nobel Prize in medicine for discovering it in 1984. That discovery was just the beginning of understanding the biochemistry and function of telomeres, though. Researchers now knew what telomerase did, but how did it do it? What other proteins, enzymes, and processes were involved?

For this newly published research, Johns Hopkins graduate student Stella Lee, lead author on the paper, spent five years developing a special assay to measure the lengthening of telomeres in lab-grown mouse cells. Then Lee, Greider, and three other Johns Hopkins researchers used the assay to measure the effect of the enzyme ATM kinase on telomeres. The scientists focused on ATM kinase because they knew it was involved in DNA repair. In the lab, they grew mouse cells, blocked ATM, and then ran Lee's new assay. The test showed that without ATM kinase, telomerase could no longer lengthen the cells' telomeres. When they took a batch of normal mouse cells and applied a drug that activated ATM kinase, they saw the opposite effect: the telomeres lengthened.

Shortened telomeres have been implicated in age-related degenerative diseases now called telomere syndromes, and overactive telomere elongation has been linked to cancer. This makes understanding the chemistry that controls their length of prime importance. Greider believes Lee's new assay will prove to be a valuable tool in future telomere research.