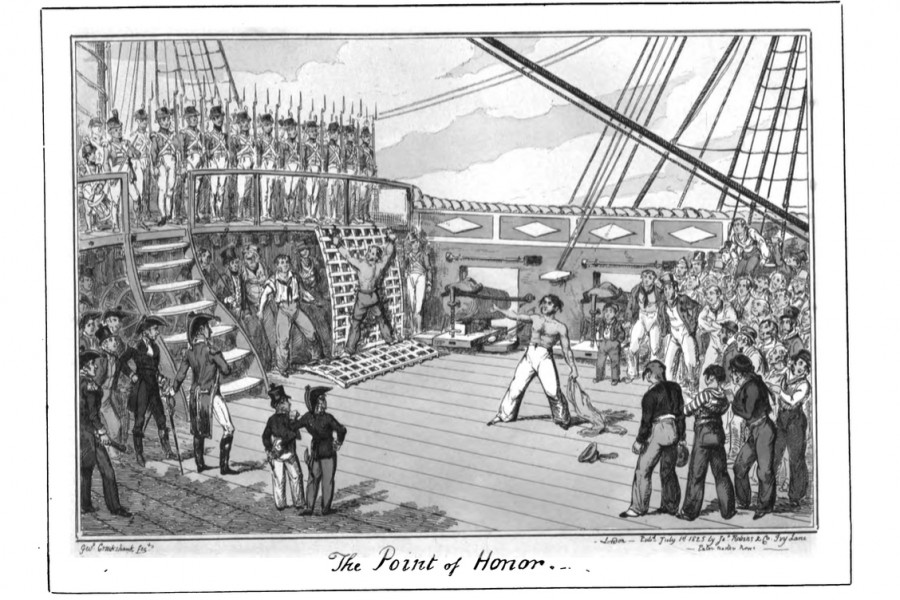 Image caption: “George Cruikshank's "The Point of Honor,” a depiction of a naval flogging, from the 1826 book Greenwich Hospital, A Series of Naval Sketches.”

Seth LeJacq didn't set out to write a detailed history of sodomy prosecutions in Britain's Royal Navy from 1690 to 1840. Initially, the doctoral candidate in the School of Medicine's Department of the History of Medicine wanted to know what everyday medical care was like for common people in the 17th through 19th centuries. The Royal Navy hired surgeons as ships' doctors, and like any bureaucracy it kept records about itself. Since ships were crewed by sailors from the working class, LeJacq decided to have a look at those records. He noticed that surgeons were called to courts-martial to testify about sex crimes.

So during his first research trip to the National Archives outside London in 2011, he thought he'd pull a few sex crimes case files and read through them; whatever he learned might occupy a chapter in his study.

He was overwhelmed by what he found. "I started finding so many more cases than I'd been led to believe," he says. The naval courts-martial records "claim to be accurate transcripts of what happened, and they're incredibly rich. Some are hundreds of pages long. You get the profanity from sailors. You get explicit descriptions of what took place. You uncover all sorts of unexpected things. I started to realize that hundreds and hundreds of men were caught up in this, and a lot of the stories are totally unknown."

LeJacq became so engrossed in those stories they became the new focus of his research. The time period they cover—the 17th and 18th centuries—overlaps with what other historians have wit­nessed as a surge of prosecutions in Northern Europe of men for sexual contact with other men. What that uptick means remains unclear. "Some people think this period is when we first start finding the predecessors to a gay minority in cities," he says. "The navy was probably the best record keeper of the entire era in Britain, and we still haven't reconstructed what happened in this history. I think there's nothing comparable for that time period, certainly not if you're trying to investigate the history of homosexuality."

He notes that the British criminal and military legal systems informed those of nearly every nation the British Empire reached, including the United States. When medical professionals were called to give expert testimony regarding sex crimes, these cases provide a framework for understanding how medical fact was used to support what was legally acceptable and led to verdicts that would shape what was considered socially acceptable. LeJacq discovered that what concerned the Royal Navy wasn't the fact of men having sex with men; it was the abuse of power. Naval courts were "particularly concerned with cases where a higher status man was having sexual contact with somebody who was of a lower status," LeJacq says. What mattered most was the difference in hierarchy: a captain forcing himself on a servant, an ordinary seaman going after a boy on the ship. "That crime worried naval authorities in a way that other crimes didn't, and my interpretation is that the navy, this rigidly hierarchical system, relied on its hierarchy at every level for how the ship was run."

This detour through men who'd been caught up in the Royal Navy's sex crime dockets, and the navy's insistence on hierarchical integrity, has brought LeJacq back to understanding the thoughts and lives of common people in this era. "The reason I felt compelled to do this work is that the ships and the navy are made up almost entirely of working-class men," he says. "They're not the kind of guys you hear from in history. Many of them were illiterate. They're very unlikely to leave any written records—maybe a will." Their testimonies become a window into understanding what they think. "What does it mean when men sleep together?" LeJacq says. "What do they think about the kind of men who do that? How do they understand this? This archive is a unique set of sources. Even up until fairly recent times, it's hard to get a sense of how ordinary people thought about sex generally—and certainly not about sex that was considered taboo."

From Samuel Taylor Coleridge's Rime of the Ancient Mariner and Gilbert and Sullivan's H.M.S. Pinafore to C.S. Forester's Horatio Hornblower series and the 21 novels in Patrick O'Brian's Aubrey-Maturin series (Master and Commander), British navy stories have occupied popular entertainment for 200 years. "We tell ourselves stories about what those people were like," he says. "We have these stereotyped images, but I think they have a lot more to do with us than with what those people were actually like. Doing full justice to their lives is a huge undertaking, but I want to look at this little piece, at least, and excavate as much as I can about how they lived and what they thought."

Tagged department of the history of medicine, royal navy