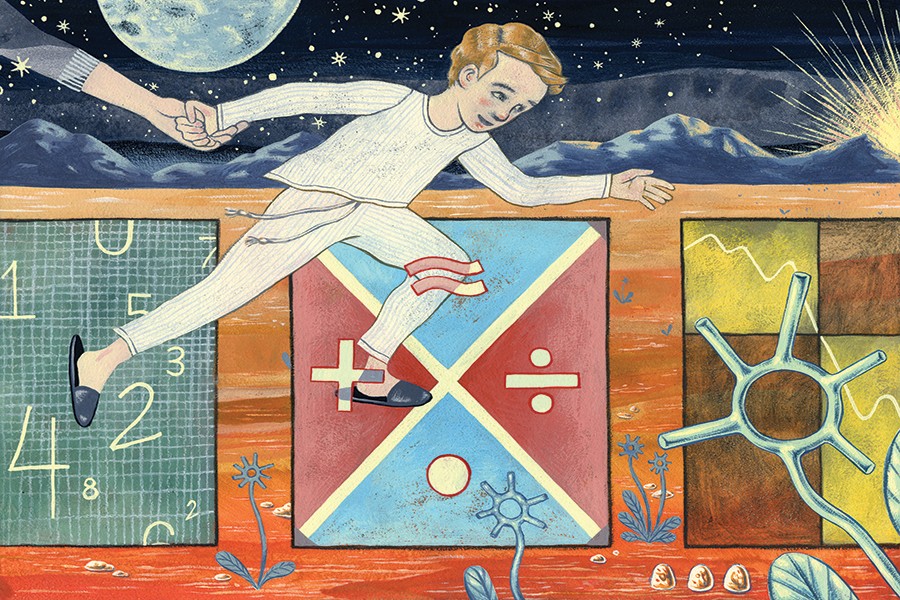 Parents teach young children to love books by reading to them, often at bedtime. Laura and John Overdeck love math, so they started giving their kids a word problem to solve each night before tucking them in. They made the little math puzzles relevant to something the family had done that day: "When we made milkshakes after dinner, we made two chocolate shakes and three strawberry shakes. How many total milkshakes did we make?" As the kids' abilities grew, Mom and Dad Overdeck raised the bar, making the problems a tad harder: "If it took two minutes to make each milkshake, how long did it take us to make all of them?"

When her third child came into his siblings' bedrooms at age 2 demanding his own math problem, Laura, who is a member of the advisory board of the Johns Hopkins Center for Talented Youth, knew she was onto something. She had made math so much fun that a kid—at least her kid—was clamoring for it. So in 2012, she began writing daily word problems, posting them to a blog she called Bedtime Math, and sending the link to friends.

Her email list grew by word of mouth, gradually. Things got out of hand, in a good way, when Maria Blackburn, a communications and marketing manager at CTY, shared the math-at-bedtime idea with some of her blogger friends. One of those friends was KJ Dell'Antonia, who wrote about Bedtime Math in the New York Times parenting blog, Motherlode, in April 2012. Months later, NPR's Morning Edition aired a story about Overdeck's blog, and Bedtime Math has grown exponentially ever since. It's now a nine-person nonprofit organization producing the website http://bedtimemath.org with daily problems for "wee ones" (preschool), "little kids" (kindergarten to second grade), and "big kids" (third to fifth grade). The nonprofit has organized math clubs in all 50 states and created no-frills apps to access the word problems on mobile devices. Overdeck has published three collections of the problems with kid-friendly illustrations; royalties from the books help fund the nonprofit.

From the start, Overdeck targeted math-phobic parents as much as their young children. "When our oldest was 7, we were already hearing parents say they couldn't help with their child's homework," she says. Recently, psychology faculty at the University of Chicago validated her belief that engaged parents could help kids' math skills. In the October 2015 issue of Science, the researchers reported on a yearlong study in which they asked 587 socioeconomically diverse first-graders and their parents in the Greater Chicago area to use Bedtime Math on the tablet app for a year. Compared with a control group of families who read stories but did not pose math problems, the children using Bedtime Math improved their skills within months. The gains were most dramatic in families of those adults who had identified themselves as anxious about math, resulting in those children's math grade levels jumping by an average of 1.2 months when tested at the end of the year. "When parents and children interact about math story problems—even as little as once a week—children show increased math achievement by the end of the school year," wrote Sian Beilock, one of the study's lead authors.

In another study led by Lisa Feigenson, a professor of psychological and brain sciences at the Krieger School, researchers are measuring the impact of Bedtime Math after-school clubs on kids' attitudes toward math. Launched about a year ago, the Crazy 8s clubs provide an eight-session activity guide and some school supplies. The clubs now number more than 1,500. "Five hundred was our stretch goal," Overdeck says. "It's just going bonkers." She's pleased that the clubs serve kids of every income level. One day, she says, she took a request for a club from the Dalton School, on Manhattan's Upper East Side, and 15 minutes later a school in rural Appalachian Ohio called.

Ultimately, the math clubs re-create what Overdeck wishes could happen in every child's home: kids bonding with others while doing fun activities that strengthen their math skills. She loves hearing reports that when sign-up sheets go up for Crazy 8s clubs, they fill in a day. "That is probably our singular achievement," she says. "There's a waitlist for math club!"