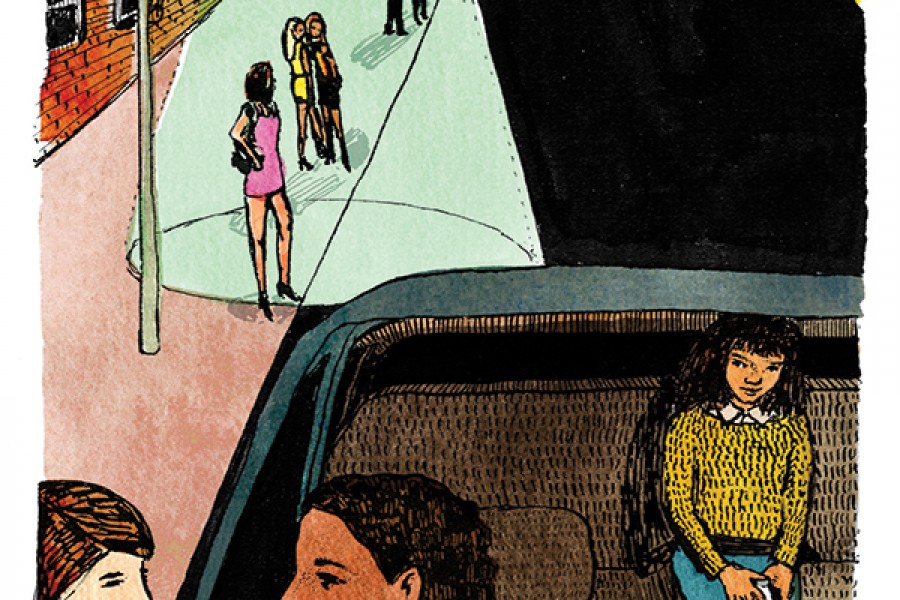 Aaron Chang's first trip to the bleak streets of southwest Baltimore came four years ago. He met a young woman there who said to call her "Candy—though that's not really my name." Chang, then the new guy on an outreach team from a Baltimore charity that encourages sex workers to leave the streets, had no interest in buying time with Candy. He was there to let sex workers, many of whom are coerced into their line of work, know that there are people who care about them. As the night progressed, Chang, Engr '14, who is now a postgraduate fellow in the Whiting School's Biomedical Engineering program, says, "I saw how much of this was going on in Baltimore and thought, 'This is ridiculous. I have to do something about this.'"

And so he does. On weekends, Chang serves as an outreach coordinator for Safe House of Hope, an organization that tries to help prostitutes get out of sex work. Volunteers pass out rubber bracelets that have Safe House's phone number discretely etched on the inside. The hope is that sex workers will call the number for help. Volunteers also hand out plastic zip-close bags, each containing cookies, candy, a drink, eight condoms, and an inspirational message that other volunteers have written on a card.

Chang is one of 100 or more Hopkins-affiliated people who have donated their time since the group was formed nearly five years ago, reaching out to thousands of streetwalkers. Right now, Chang estimates, nearly two-thirds of the group's volunteers have some Johns Hopkins connection. "We have between 15 and 40 Hopkins volunteers at any given time," says Denene Yates, the charity's founder. While taking a year off between graduation and starting his master's studies, Chang created a website that allows Safe House volunteers to schedule outreach rides, share notes on some of the prostitutes they encounter, and compile descriptions of abusive johns and their vehicles so that volunteers can warn sex workers about them. Chang often drives on street runs.

Theresa Barberi, a postdoctoral fellow in pediatric oncology at the School of Medicine, not only works as the charity's administrative coordinator—producing a newsletter, writing grant proposals, organizing meetings, and helping with volunteer training—she is also the point person on many outreach rides. Sitting in the passenger seat, she interacts with sex workers. Because of the danger that a pimp may be lurking nearby, Barberi takes only two minutes to let prostitutes on the street know that someone else is keeping an eye out for them. "It's important to note that we're not rescuing people," says Barberi, who this year received a Johns Hopkins Martin Luther King Jr. Community Service Award for her volunteer work. "We're offering a way to bridge the gap between the streets and a new life."

Tara, a 38-year-old Safe House client who had been regularly beaten and pimped out of a Baltimore hotel (and who would not divulge her last name), says Barberi has become not just an aid to her recovery but a friend. "She's taken me to her church, had me meet her friends, and when I got sick she took me to the hospital," she says. "She's become the sister I never had."

Volunteers say that the constant contact with sex workers, very few of whom become Safe House clients, can take its toll. "You see this dead look in their eyes," says Chang, who first heard about Safe House through his church. When he saw Candy again one year after their first encounter, she looked almost skeletal. Undergraduate Christine Situ was introduced to Safe House of Hope by her dorm's resident assistant, who invited her to pen some of the message cards. Now, she spends some weekend nights sitting in the backseat during outreach runs, entering notes into her smartphone on a sex worker's appearance, gender, name, and whatever they had to say. "At first, I was surprised at the realness of it all," says Situ. "The fact that you can see someone as young as 13 working the streets shocked me. At Hopkins, you can feel trapped in a bubble until you graduate and leave. Working at Safe House has taken me out of that bubble and made me see the real need to work with underprivileged groups."