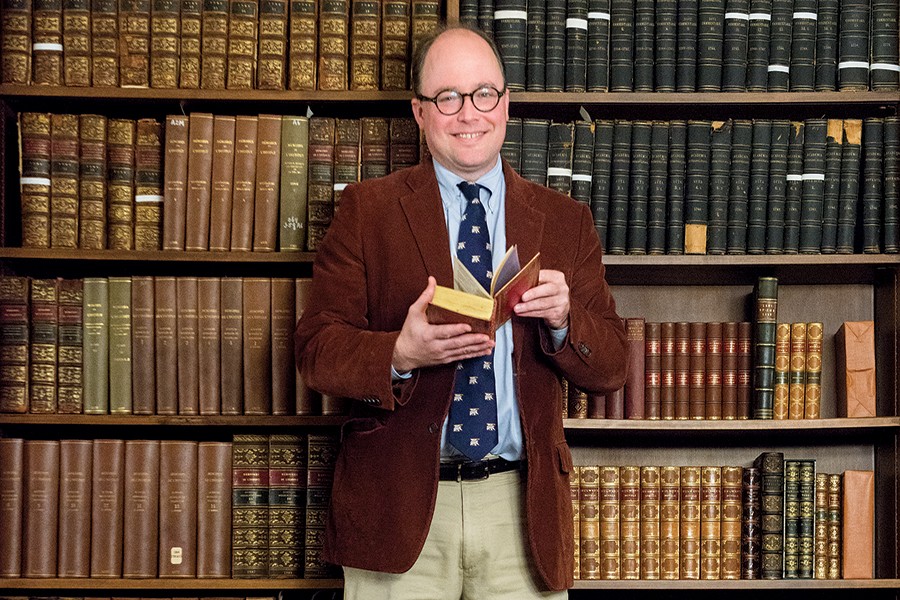 "She was a natural teacher," says Robert Hall, Engr '55, of Nancy Hall, his wife of 59 years. "Many teachers are only lecturers," he says, drawing the distinction. "But the really good ones are engagers."

When his wife passed away in May, Bob Hall, who works as a managing director at Brown Capital Management, knew just what to do. With a pledge of $2 million, he established the Nancy H. Hall Curatorship of Rare Books and Manuscripts at the Sheridan Libraries, "an in-perpetuity extension of what Nancy was all about." The Sheridan Libraries' Earle Havens will be formally appointed to the position at a ceremony on March 15, 2016.

Nancy was, first and foremost, an educator. In her 20s, when she and Bob first married, she spent several years teaching second and third grade in New Jersey and Massachusetts before the couple returned with their three children to Maryland. She later worked as a speech pathologist and audiologist in Baltimore City Public Schools. Her love of teaching wasn't reserved for children: Nancy was a docent for more than 25 years at the Walters Art Museum, where she especially enjoyed introducing visitors to the Asian art collection. She was also a docent at Johns Hopkins' Homewood Museum. Her teaching continued even while on vacation. "We would troop through museums in Italy," Bob Hall says of their infrequent but treasured travels, where all the educational materials were written in Italian and Latin. "Nancy would read them to me."

Throughout their marriage, Nancy and Bob focused their giving on endowments meant to ensure that the humanities thrive for future generations. (While Bob studied engineering at Johns Hopkins, he suspected that courses in philosophy, economics, and history might prove useful in later life.) "The humanities are all about the human condition, and the human condition needs all the help it can get," he says. In 2004, the couple established the Nancy H. and Robert E. Hall Professorship in the Humanities at the Krieger School, a position currently held by Felipe Pereda in the Department of the History of Art. Bob also served as a Peabody Conservatory trustee in the '80s and a Krieger School Advisory Council member in the 2000s. Nancy served from 2003 to 2007 on the advisory committee for the Sheridan Libraries.

Although Nancy never met Havens, Bob met the curator on many occasions before his wife's death and was impressed by Havens' ability to engage with just about anyone. "I could see that Earle was a fantastic teacher. He is always asking, not just telling. He is the perfect guy for the perfect gift for the perfect lady."

Havens says the endowed curatorship guarantees that there will always be someone at the libraries who can connect students and faculty with historical artifacts. Even more, the curator-scholar position expands what the libraries can do by increasing opportunities for partnerships and projects to enhance the university's reputation as a leader in the digital humanities.

Havens' responsibilities converge around the Renaissance ideal of ad fontes, in English "to the sources." Havens builds and cares for world-class collections, publishes scholarly work on early print and manuscript culture, teaches courses, and creates paths into the digital humanities, all in an effort to understand the ways historical texts were represented to their original audiences. "To be an undergraduate and read Dante for the first time in your life with a Dante scholar, and then to flip through the first illustrated editions of the Divine Comedy—that is a priceless encounter. It's been the greatest privilege of my career to expand the horizons of students in similar ways," he says.

Some of Havens' most recent work supports a digital humanities initiative called "The Archaeology of Reading in Early Modern Europe." The research project brings together an international team of humanists and technologists to explore the history of reading practices in 16th- and early 17th-century Europe by focusing on unique manuscript marginalia. Beyond the digitizing of texts, the project will allow scholars today to understand how scholars read 450 years ago.

Bob Hall says such work, which helps usher Hopkins "into the digital age of education," underscores his alma mater's legacy as America's first research university. Today, the alumnus is often seen in Baltimore's museums and the Sheridan Libraries' Special Collections & Archives, attending lectures on Roman obelisks, the King Memorial Windows of Johns Hopkins, and more. "I have been in Earle's inner sanctum," he says of the collections cared for by Havens. "A curator like Earle brings the artifacts to life."