The way they're wired 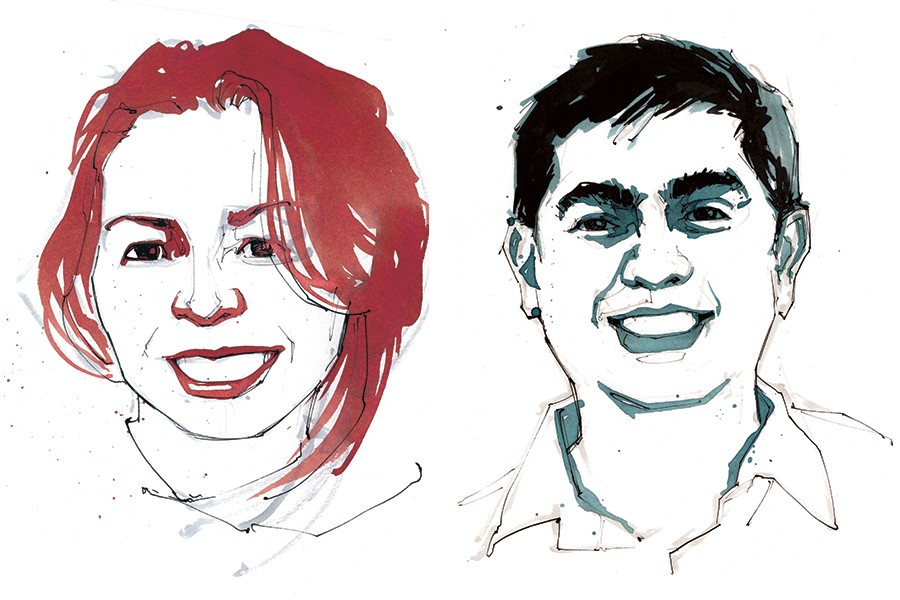 In 1998, Neil Bardhan was one of the popular kids at Johns Hopkins University's Center for Talented Youth program in Clinton, New York. In his final summer with the center, the 16-year-old emceed the talent show, played Ultimate Frisbee, and ate lunch with the other "Nevermores," CTY's nickname for students who were about to age out of the program. "Out of respect, everyone knows who the Nevermores are," says Masha Chepovetsky, who was 13 at the time. "Neil was like a minor celebrity to me."

Bardhan, A&S '04, and Chepovetsky don't remember meeting each other that summer. But 17 years later, they credit CTY for their lasting friendship—it's just that most of it has been virtual.

In the early 2000s, Bardhan and Chepovetsky followed each other on LiveJournal, an online diary platform popular with CTY alumni. In 2004, Bardhan started a graduate program in brain and cognitive sciences at the University of Rochester, where Chepovetsky was an undergraduate. Although they lived down the street from each other, they connected only through AOL Instant Messenger, talking daily about local events, mutual CTY friends, music, and their tendency to overanalyze situations—a predisposition they can't help but laugh about. Bardhan remembers a time, for example, when he decided to leave a concert early because he was tired and bored. When he got home, he became anxious, wondering whether his exit was disrespectful to the performers. He called Chepovetsky. "She talked me through it," says Bardhan, now a science communication consultant living in Philadelphia. "It turns out it's fine to leave a concert early if you're not having a good time." From San Francisco, Chepovetsky laughs. She knows that this seemingly simple decision could eventually lead them both to ask existential questions like, Am I even having fun the right way? "Sharing that tendency is a major component of what has made us such a great support system for one another," she says.

Bardhan and Chepovetsky finally connected in person in 2009 at her 24th birthday party, where they caught up like old friends. "We just knew that we got each other, and it wasn't like meeting a total stranger for the first time," Bardhan says.

A year later, they were getting together weekly to watch Mad Men. By then, their relationship had deepened. Bardhan was about to move to the Netherlands to complete postdoctoral work in psycholinguistics. Chepovetsky would soon move to California to run a biotech startup; the experience burned her out, leading her to seek a career in holistic health. Their conversations about these life events were emotional and honest. Bardhan, who recently met up with Chepovetsky for the first time in five years, says he appreciates having a close friend who isn't part of his day-to-day life. "We don't have to worry too much about saying the wrong thing," he says. "With Masha, there's a strong component of authenticity. That's not always the case with friendships."