One afternoon in fall 1996, I was standing in the middle of the Upper Quad, leaning on a short, rectangular piece of wood. Swami, a fellow engineering graduate student with big, broad shoulders, was running toward me, about to hurl a tennis ball. 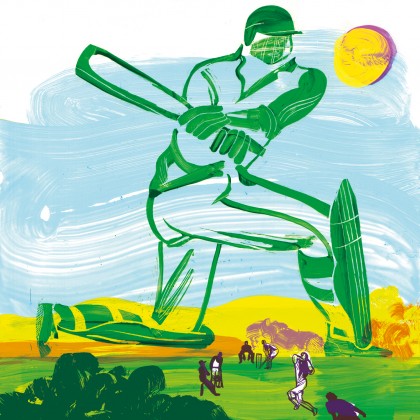 The substitute for a cricket ball flew in my direction. I made contact—that sweet contact of bat to ball that every ballplayer knows—and began to run. At the other end of our makeshift cricket pitch, my fellow batter, Kumar, hesitated. Unlike myself—22, ink still drying on my bachelor's degree—Kumar was old, perhaps even as old as 28. He had submitted his dissertation to the library that stood to my left as I ran, and this was his last day in Baltimore and the last of the several hundred games of tennis-ball cricket he had played on the Upper Quad. Kumar's hesitation was well-founded. I should never have called for a run. I had hit the ball straight to a fielder and Kumar didn't stand a chance—out without getting a hit in his last game. And it was my fault. Kumar looked at me, but being my senior by several years, a married man with a PhD and a job waiting for him in Minneapolis, he could not express the disappointment written across his face.

Suddenly the game's usually relaxed pace, an object of amusement for those who stopped to look as they passed through the quad, grew frantic. When the game finished, Swami made a show of looking up at the sky and said: "I think we have time for one more game." Everyone agreed. In that contrived last game, Kumar got what he needed: the feeling of bat on ball one last time before he left the safe environs of the Homewood campus for the wild Midwest.

Two years later, Swami played his last game of cricket the day before Thanksgiving. "Going to Durham, to meet Srinadh. Want to come?" he asked, referring to a former Upper Quad cricketer who had graduated and moved away. Swami never returned. That large but nimble body, so often seen steadying itself under a fly ball while its owner yelled, "Got it! Got it!" in an accent that was no longer Indian but not yet American, had been crushed when the car he was riding in hurtled headlong into the pillar of an overpass.

At the Glass Pavilion two days later, many of my fellow Indian graduate students shed the self-effacement that often comes with being a student in a foreign land and stepped up to the mic to share their stories of Swami. What I remember all these years later was what Swami's former roommate said. "I wish we had some time," he said. "Some time for one more game of cricket on the Upper Quad."

Amitabha Bagchi, Engr '99 (MSE), '02 (PhD), is the author of This Place, a novel involving a Pakistani eatery, the railway history of Baltimore and, of course, Cal Ripken, set a couple of blocks south of the Homewood campus.