Muslim fiction writers are turning to genres like sci-fi, fantasy, and comics 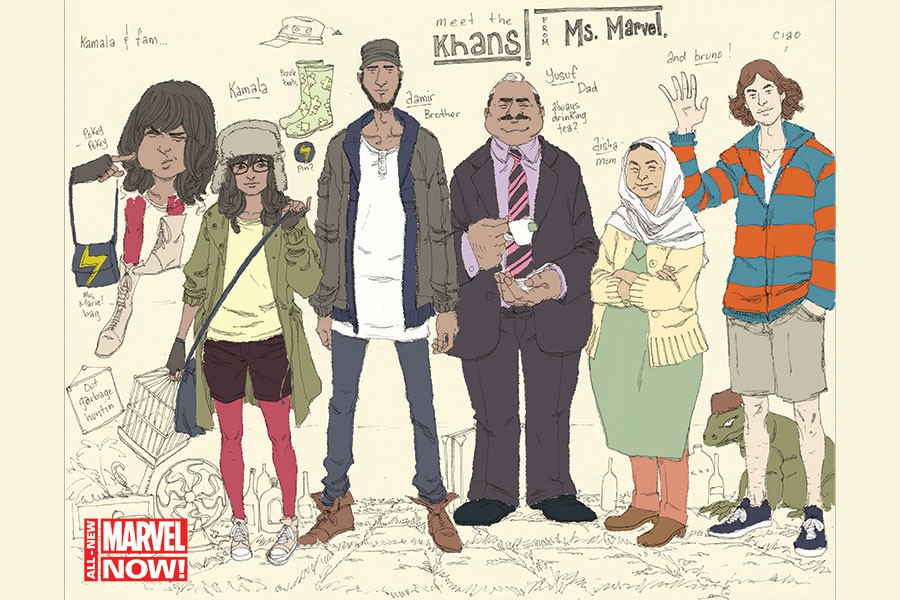 Alif the Unseen, the 2012 debut novel of G. Willow Wilson, takes an inventive approach to the contemporary techno thriller. Its titular hacktivist is a freelance security provider trying to evade the oppressive state censors in the unnamed emirate where he lives. And he's aided in his efforts by a mystical, ancient text titled One Thousand and One Arabian Days. Wilson, a young American woman who converted to Islam after moving to Egypt and falling in love in the early 2000s, seamlessly blends elements of fantasy, dystopian adventure, Islamic literature, and contemporary politics into a genre-defying literary read.

And for Noor Hashem, a Mellon postdoctoral fellow in the Humanities, Wilson's Alif is a prime example of how a growing number of Muslim fiction writers are turning to genres like science fiction, fantasy, and comics to navigate Muslim identity and aesthetics in a post-Sept. 11 world.

"She's really someone who is taking charge in this field," Hashem says, adding that Wilson is an active comics writer and part of the creative team behind one of the most successful mainstream examples of this trend: Marvel Comics' reboot of Ms. Marvel. In the Marvel universe, three different women characters have gone by the Ms. Marvel name since the late 1960s, and the super-heroine series relaunched last year with Kamala Khan in the title role. Khan is a Pakistani-American teenager living with her parents in New Jersey, the first Muslim character to headline a comic in the publisher's history.

Hashem became a fantasy and science fiction fan growing up in Southern California, but she wasn't going to consider genre fiction when she was working on her English dissertation at Cornell University. In "Creative Ritual: Embodied Faith and Secular Reason in Contemporary Muslim Fiction," Hashem examines how contemporary authors portray the faith practices of Muslim characters living in a secular world. She spent the past year preparing that dissertation for publication, and when her ongoing research kept bringing her into contact with examples of Muslim fiction writers turning to genres like sci-fi and comics that fit her thesis, she realized she couldn't ignore them. She's currently adding a chapter about the genre to her in-progress book, and this fall at Johns Hopkins she will teach Muslim Science Fiction, an introductory course that covers Muslim speculative fiction from Zakariya al-Qazwini's 13th-century Awaj bin Anfaq, about an alien who visits earth, up through contemporary examples such as Saladin Ahmed's 2013 Hugo Award–nominated Throne of the Crescent Moon.

She says she was a bit surprised to find genre examples that addressed her academic interests "because there's always the burden of representation for minority writers, a pressure to show the reality of identity." And reality, an accurate understanding of how life is experienced, is historically the domain of literary realist fiction. "But for [Muslim fiction writers] to go completely in the direction of sci-fi—and some of them are hardcore sci-fi writers, thousand-page tomes, trilogies, that kind of thing—embracing what is considered a minority writing tradition is interesting."

In conversation she pauses to unpack the term "Muslim fiction," which is being used by scholars to describe a wide range of contemporary writers. Muslim fiction isn't defined by a single ethnic group or nationality, and the term is often used in relation to writers publishing for an Anglophone audience, meaning they are immigrants or of a first generation born in a Western country. These authors and their characters may or may not strongly identify as Muslims.

Hashem mentions Southern writer Flannery O'Connor as a comparison. "Christian allegory is very apparent in her fiction, and her own relationship with religion is well-documented," she says. "And to not look at that [aspect] would be to ignore something that's very important to understanding that text. It's not the only way of seeing [O'Connor], but one of many."

And, for Hashem, looking at texts through the lens of Muslim fiction reveals recurring themes, such as how these writers are challenging the cultural boundaries that ostensibly separate Muslims from the West. "That's largely because Islam has come under a spotlight since 9/11," Hashem says. "So politics and current events have made it so that writers often use Islam or a character's relationship to religion to investigate their relationship to the world in general."

It's not surprising that Muslim writers are exploring the metaphorical freedom that this genre encourages. The 20th century is littered with writers, from Octavia Butler and Angela Carter to Philip K. Dick and Samuel R. Delany, who use fantasy and sci-fi to navigate ideas about gender, politics, race, and sexuality. But where sci-fi writers might allude to Christian spirituality and a secular Western literary tradition, Hashem is seeing Muslim fiction writers explore Islam and its literary culture in their works, such as the comic book series The 99, an allusion to the 99 names or characteristics of God; Helen Wecker's The Golem and the Jinni, Kim Stanley Robinson's The Years of Rice and Salt, and the short-story collection A Mosque Among the Stars.

"I found that a lot of writers were turning to sci-fi, speculative fiction, or fantasy, and my theory is that realism as a style is something they're trying to get away from for various reasons," she says, adding that genre is "a way of exploring a rich religious tradition that looks beyond the mundane and tries to relate the spiritual to the mundane. Some of these writers turn to A Thousand and One Nights, especially particular stories in it with characters like the Jinn, that come from a religious tradition. They go here and discover, 'We have this tradition that we can also draw from as writers and gain something in our imagination.'"