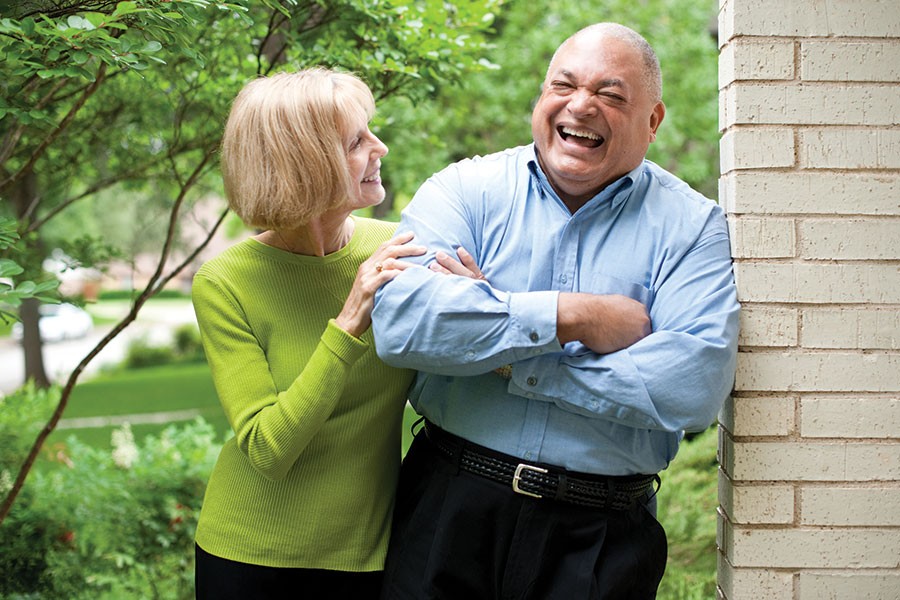 Image caption: Elaine and Leo Bell outside their Dallas-area home

For as long as he can remember, Leo Bell, A&S '71, was determined to become an officer in the U.S. Army. It was an ambitious goal for an African-American boy growing up in a rural, racially segregated town. But Bell equated the Army with seeing the world and advancing as far as his personality, skill, and tenacity could take him.

Bell spent much of the 1950s and '60s in Weimar, Texas, a small town that was, like the rest of the state, racially divided. He returned to his birthplace of Houston for high school, where he joined the Army Junior ROTC. He was the Class of 1967 valedictorian and a National Merit Scholarship finalist, achievements that opened doors for him. Soon, he was inundated with brochures from colleges throughout the country. He happened to be watching a special that was part of the Bell Laboratory Science Series made for AT&T Corporation in the 1960s when, during a commercial break, a Bell Labs engineer mentioned Johns Hopkins. "I went back and pulled that brochure, and I said, 'This is in Baltimore.' And the first thing I thought of was Johnny Unitas and Raymond Berry," he says, referring to the Baltimore Colts.

He was accepted by Johns Hopkins on an ROTC scholarship and partial support from the university. One of few African-Americans and Texans in the Class of 1971, Bell sees his experience at Johns Hopkins as life-changing—and the reason he included a significant gift in his will to establish a scholarship fund for future students. "It was Johns Hopkins that prepared me to do the things that I consider successful," he says. "I always wanted to be an Army officer, but I think I was a better and more effective Army officer because of my experiences at Johns Hopkins."

Bell appreciated the small classes, which allowed him to interact with professors, and the opportunity to take higher-level courses alongside graduate students. As he worked toward his degree in psychology, he developed skills he would use later as an Army officer in the military. "My units were some of the best ones out there, and twice we set records," he says. "That was because of the motivational techniques that I learned at Johns Hopkins—how you lead people to do difficult things that they wouldn't necessarily want to do."

The day before he graduated, Bell was commissioned in Shaffer Hall as a second lieutenant in the U.S. Army Field Artillery. The next three years took him to Fort Benning, Georgia, for airborne school; officer training in Fort Sill, Oklahoma; assigned duty in Fort Carson, Colorado; and on to his initial tour in South Korea as a first lieutenant. Though it had been more than 10 years since the end of the Korean War, the U.S. continued to have a presence there, and it was still dangerous, especially in the demilitarized zone between North and South Korea. U.S. troops patrolling the area were routinely shot at by North Korean soldiers. "My first ducking from enemy fire came then," says Bell. "And no one at home knew we were still risking life and limb. At least four infantry soldiers died during my rotations."

Back in the States, Bell earned a master's degree in education in 1981 and continued his military career. He eventually changed from Field Artillery to the Medical Service Corps and was appointed the Army surgeon general's representative in the Dallas area.

Bell retired from the Army in 1993 as a lieutenant colonel with many military honors, including the Legion of Merit Medal, three Army Commendation Medals, and two Meritorious Service Medals. He worked for the U.S. Post Office for the next several years, fully retiring in 2010. He stayed connected with Johns Hopkins, giving regularly, becoming a member of the Alumni Association's Cerulean Society (recognizing those who give $1,000 or more to the Alumni Association's endowment), and volunteering to interview prospective Johns Hopkins students from the Dallas area, where he lives with his wife, Elaine. When he wanted to contribute in a more meaningful way, he decided on a gift through his estate. "Giving through a will or revocable trust is an attractive alternative for those who are considering a gift or would like to increase their support to Johns Hopkins," explains Richard Letocha, a Johns Hopkins gift-planning adviser. "Their gifts cost nothing in their lifetimes, and they have the peace of mind that they can modify their plans if their circumstances change." Bell's gift will establish an endowed scholarship fund for Krieger School students from Bell's home state.

For Bell, it is important to ensure that future generations of Johns Hopkins students benefit from their university experience as much as he did. "I hope that some Texans, who may know very little about what's going on anyplace other than the community they are from, will have the opportunity to see that there is a wider world out there," he says. "And there are opportunities at Hopkins for them to learn, grow, prosper, and achieve."