A test that can accurately predict long-term death risk

From 1991 to 2009, more than 58,000 people underwent standard treadmill stress tests at Detroit's Henry Ford Hospital for symptoms of heart disease: chest pain, shortness of breath, fainting, or dizziness. Haitham Ahmed, a cardiology fellow at the School of Medicine, recently led a team of researchers in a study of data generated by this program and determined which of the treadmill test variables most strongly correlated with survival over 10 years. From this analysis, the researchers hoped to quantify mortality risk more precisely. The result was the FIT Treadmill Score, an algorithm that accurately gauges long-term death risk based on treadmill exercise performance and three other important cardiovascular risk factors.

When the researchers examined the records of the 58,020 patients, four factors stood out as important for predicting mortality over 10 years, says Ahmed. Two were age and gender. A third was maximum heart rate achieved during the stress test—the patients walked or ran on a treadmill that increased elevation and speed every three minutes (called the Bruce Protocol Treadmill Test), exercising to their maximum capacity and stopping if they experienced symptoms such as chest pain or dizziness. The last important factor was indicators of metabolic equivalents of task, or METs, achieved, a gauge of how much energy the body expends during exercise. 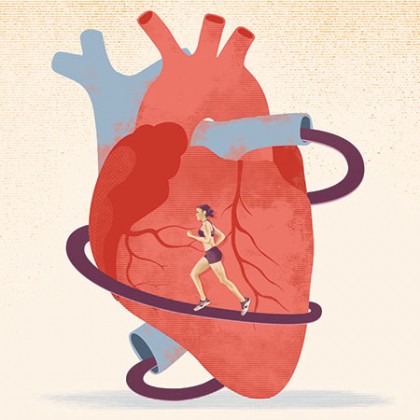 Based on their analysis, Ahmed and the team (senior author was Michael Blaha, director of clinical research at the Johns Hopkins Ciccarone Center for the Prevention of Heart Disease) created a predictive algorithm, the FIT score, that factored age, gender, and the stress test results, including METs: percent of maximum predicted heart rate achieved + 12 x METs – 4 x age (+43 if female). This produced a score for each person between -200 and +200. The higher the score, the higher the predicted survival over 10 years. When the researchers applied the FIT score to the data from the 58,020 patients in the dataset, they found that it predicted with 97 percent accuracy who would still be alive 10 years after the stress test.

Ahmed believes the FIT score better reflects the complex nature of cardiovascular health than the standard treadmill test alone. And this is important—in analyzing the Detroit data, the researchers found that cardiovascular fitness level was the single most powerful predictor of death or survival. People with stress results considered in the normal range still vary in their degree of fitness, and the FIT score produces a more nuanced assessment of their cardiovascular condition and long-term survival. Plus, the FIT score is so simple to calculate, it could be done at home by people who own personal treadmills. Treadmill manufacturers have expressed interest in incorporating the algorithm into home treadmills, and software developers are interested in creating mobile health apps that incorporate the FIT formula.

"We wanted to develop a test to motivate behavioral change," says Ahmed. In a time of increasing medical costs, there's value in providing a tool that can be included in home exercise equipment or mobile apps. "It's satisfying to provide information that doesn't require additional blood draws or further testing," he says. "We're now in an era when information is readily available—consumers want to know quantitative data and results. If we can give them the most specific info that we can about their own health, that's valuable."

An ominous FIT score is not a terminal diagnosis. Patients can take steps to promote a longer life if they take a low score as a warning. Ahmed believes FIT could be more effective at prompting healthy behavioral changes. "There's a very big difference in my saying, 'Based on your treadmill test, you fall into the 40th percentile of health among women your age,' and my saying, 'If you're able to increase [your FIT score] by exercising, you can increase your chances of survival.'"