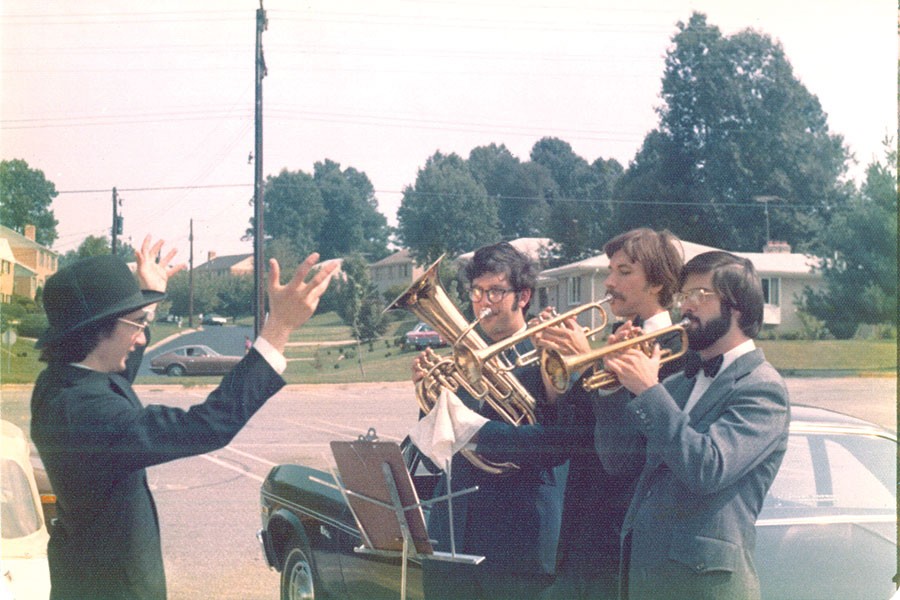 He spent a week thinking it over, then told the news to friend Mark Goldstein, A&S '73, Peab '75, a student with whom he shared a rowhouse near Homewood. Goldstein, who was about to begin percussion studies at the Peabody Institute, offered to write and conduct a tune to be performed at the proposal.

The plan was set. A brass trio with Goldstein as conductor would show up at Gutheil's house in Bethesda, Maryland, so that Kallman could profess his love between interludes of music. Kallman would then propose, and, assuming all went according to plan, everyone would celebrate to the sound of Mendelssohn's "Wedding March." "This was just the sort of unique thing that Mark would engineer," says Alan Lane, A&S '73, a friend of Goldstein's who played the trumpet at the occasion.

On the day of the proposal, the musicians donned suits and the young men headed to Bethesda. As Kallman and his entourage made their way to the backyard of Gutheil's home, her parents and siblings watched from a nearby window. "She didn't even realize at the absolute beginning that I was proposing," says Kallman.

The proposal was a success, and Gutheil and Kallman are still happily married 41 years later. Kallman and Lane have remained close to Goldstein. The friends are now scattered at different points across the country: Kallman is mostly retired from his business developing student apartments in Gainesville, Florida; Lane still lives in Baltimore and is in charge of open government at the Social Security Administration; and Goldstein lives in San Francisco and is a senior technical writer for Google.

Kallman recalls going to New York City with Goldstein to watch Shakespeare in the Park. Lane remembers the parties with Goldstein after combined rehearsals and performances of the Hopkins and Goucher glee clubs and the Goucher-Hopkins Orchestra.

As for Goldstein, he considers both friends to be family. "Just the knowledge that Clayton knows so many of the people who were important to me—he knew both my parents, my grandma, he knows my sisters—in that sense, he is a big brother, and a good one," says Goldstein. "Alan is a best friend for life because of all the years and music making we shared at Hopkins and in Baltimore."