Adventure is out there

Addressing a crowd of graduating students, Pixar co-founder Ed Catmull emphasized the necessity of failure as part of a creative life. He urged graduates to think of failure not as a necessary evil but as a "necessary consequence of doing something new—and you should always do something new." Catmull, president of Walt Disney and Pixar Animation Studios, was the featured speaker at this year's universitywide commencement ceremony, held May 21. 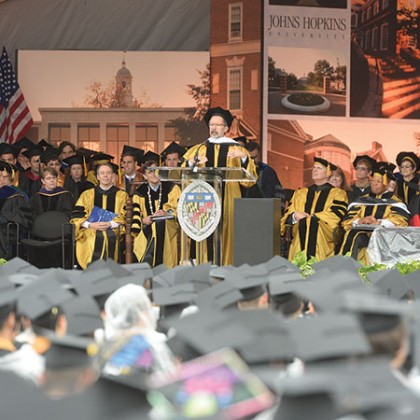 He spoke after remarks from Johns Hopkins University President Ronald J. Daniels, who brought Hopkins' setting in the city of Baltimore to the forefront. Daniels called upon graduates who remain in Baltimore to bring "better health, better education, and more jobs to our most challenged neighborhoods."

More than 7,000 students received their degrees at the ceremony.