Respect in the ICU

Modern intensive care units are loaded with technology, and ICU clinicians frequently are pressed for time. So it can be common for physicians to take the quickest path of least resistance in dealing with ICU patients. For instance, they might look first not at the patient but at the readout on a machine, or they might speak to family and other people in the room as if the patient—who may be harder to engage because of sedation or impairment—were not present and an important part of the conversation. 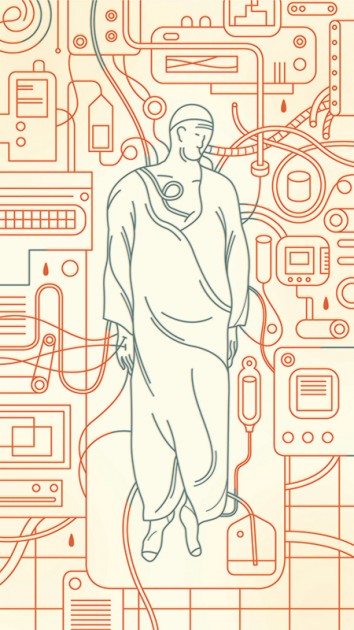 Beginning in 2012, Gail Geller, a professor in the School of Medicine and Berman Institute of Bioethics with a history of addressing ethical questions, and several ethicists at the Berman Institute of Bioethics began examining issues of respect and dignity in ICUs. For example, is not doing enough to include patients in conversations about their care disrespectful? And, in light of studies that show improved outcomes when patients are involved in their own care, might that disrespect do actual harm?

Their research was part of Project Emerge, an ongoing study by the Armstrong Institute for Patient Safety and Quality at Johns Hopkins Medicine, which has been examining preventable harm in the ICU. Forms of preventable harm include delirium from sedation, ICU-acquired weakness due to inactivity, complications that can arise from being on a ventilator, and loss of respect and dignity. The bioethicists became involved in the study, Geller says, because "bioethics includes clinical or medical ethics, and respect and dignity—and respect is one of the major virtues in clinical practice. It is centrally a moral virtue. If we don't treat other people with respect, there's reinforcement of hierarchy, which leads to injustice. Respect for persons is a big part of medical ethics."

The research by Geller et al. included interviews with patients and families, focus groups with health care professionals, direct observation, and analysis of patient and family survey data. Geller, who conducted focus groups and interviews with patients and families, notes the researchers heard common themes: for example, concern by families and patients regarding a preference for checking machines over one-on-one patient contact, and complaints by elderly patients who felt that conversations were directed not at them but at their children, and that this constituted ageism. Nurses observed that restrictions on how many hours residents and attending physicians may work have limited the number of hours that doctors and nurses spend together, and they expressed concern that the decreased communication between the two could adversely affect patient care.

"Unintended consequences such as those from overreliance on technology were a common theme," says Geller. She notes that being listened to was a dominant concern among patients and families. "Hearing me, having my voice be heard, having my preferences sought, and not judging me or having preconceived judgments—those were the important points made." Geller is quick to add that doctors and nurses are by no means uncaring. "There are unlikely to be egregious violations of respect and dignity in hospitals. These are good people doing the best they can. That said, the accumulation of small things that go unnoticed is something that can be minimized."

Project Emerge is working to redesign ICU workflow, culture, and technology by focusing on clinicians, bioethicists, specialists who study what makes a system more usable and appealing, and patients and their families. One of its experiments includes using tablet applications in Johns Hopkins Hospital and two other hospitals, where patients' families can input personalizing details about the patients—nicknames, hobbies, photos of them living their lives, etc. "The clinicians only see patients at their worst. It has a powerful effect if clinicians can see a picture of the patient playing with their grandchild, or at their wedding, or otherwise in their lives. Then they aren't just 'that diabetic in Bed 7,'" says Geller.

One possible plan is to develop a checklist of behavior that patients and families believe will improve ICU care—to be used with the tablet app—as well as a measure for asking clinicians what care is like in their unit, says Geller. "While we're still working out details, a tablet has the potential to be a very efficient way of collecting information about patient experience."