When Zoe Fraade-Blanar, Engr '02, and Aaron Glazer, A&S '02 (BA/MA), told their friends they'd started a business selling giant, round stuffed animals, they were met with looks of bewilderment—followed by a chorus of, "Can I have one?" Founded in 2007, Squishable offers hundreds of unconventional plush toys, from cinnamon buns to three-headed dogs, in its online store. Fans on social networks help Squishable develop new products; many submit designs online, and the company later brings those ideas to life. The company's founders link much of their success to this open-source platform—dubbed Project Open Squish—that allows users to play a role in generating ideas. 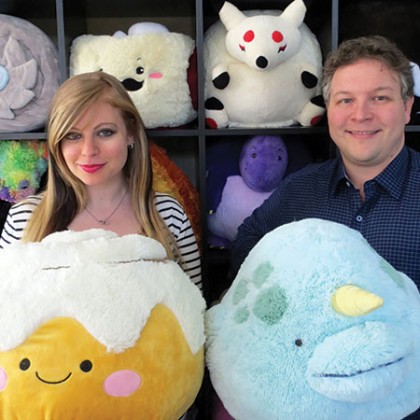 How did you get the idea for Squishable?

Zoe After the big tsunami in 2004, we were in Asia volunteering and we happened to find this factory we liked. When we got back to the States, we decided to try importing stuffed animals and designing our own. Lo and behold, it actually took off.

Aaron We ran it as a side business for a couple of years when we both were doing IT consulting. We were packing boxes, setting up the website, and walking down to FedEx every afternoon. After a couple of years, it got to the point where it was taking a lot of time but not making any money. So we decided it was time to go full force.

What makes Squishable different from other businesses you've run?

A I think this is the best product we've worked with. People love Squishables. We were able to tap into the combination of having this amazing product with an amazing design team, coupled with being able to sell directly to consumers on a website. They were cute, they were adorable, they made people happy, and customers could buy them on a website and have them delivered to their door.

How does Project Open Squish work?

Z Fans send in designs—hundreds and hundreds of designs—that they drew. We have templates they can download to make sure they're using our proper formatting. We give people general guidelines and then we say, 'Go ahead, run free, let's see what you do with it.' We get all these submissions, and the ones that we think would make good Squishables, we put up for vote on our website. We have 20 items go up every two weeks. Any design that makes it above a certain threshold of votes we will put into prototype. The winners get a cash payment, a gift certificate, their prototype, and they get their name on the hangtag if it gets made into a final Squishable.

How does Squishable differ from other toy companies?

Z We've often said one of our biggest advantages in the toy industry is that we had no idea what we were doing when we first started. We ended up doing things any way we could find to do them, which means we stayed away from a lot of the ongoing issues that toy manufacturers can fall into. We started out entirely retail, which is very unusual for the toy industry, a heavily wholesale market. If we'd started off wholesale, I doubt we could have gotten the toehold we did. But because we sell directly to buyers, we could manufacture Squishables in small enough numbers that we could build up slowly.

A We were able to build out our line through direct contact with fans, which replaced market research in a lot of ways. We didn't have to put together market research panels and figure out what our fans want. We knew what our fans wanted. We talked to them. And since we were able to make and sell directly to our consumers and make smaller amounts of plush, we could be a little more creative with what we did.

Did you have a single success that has stuck with you?

A I think it was two years ago. We launched a Squishable Corgi, which is an absolutely beautiful dog. We got a bunch of them in right before Christmas and we told everyone we would send an email out when the next batch came in. We sent the email out and broke the website for about six hours because we had several thousand people hitting refresh on their computer screen at exactly the same time to try to buy the Corgis. That was one of those "nice-to-have" problems.

What is your all-time favorite Squishable?

Z I'm going to say narwhal. It was the first time we did a design I honestly had never seen anywhere before. We did it and people loved it. It was one of those aha moments where we realized we should continue doing these designs that are very unusual instead of just a cow and a sheep.

A I'm going to have to say Cerberus. It is one of the most complex designs we'd ever done.

You got married in 2013. What is it like running a business with your spouse?

Z We've been doing it for so long on so many projects, it's lost a lot of the weirdness. You do have to know when to put down the work and when to start talking about what we're going to have for dinner instead.

A Like any personal and working relationship, it has its ups and downs. But I can't think of a better way to spend my days. We've done this for so long, it's kind of like this is natural. I don't know what we would do if we didn't.