On and off the court 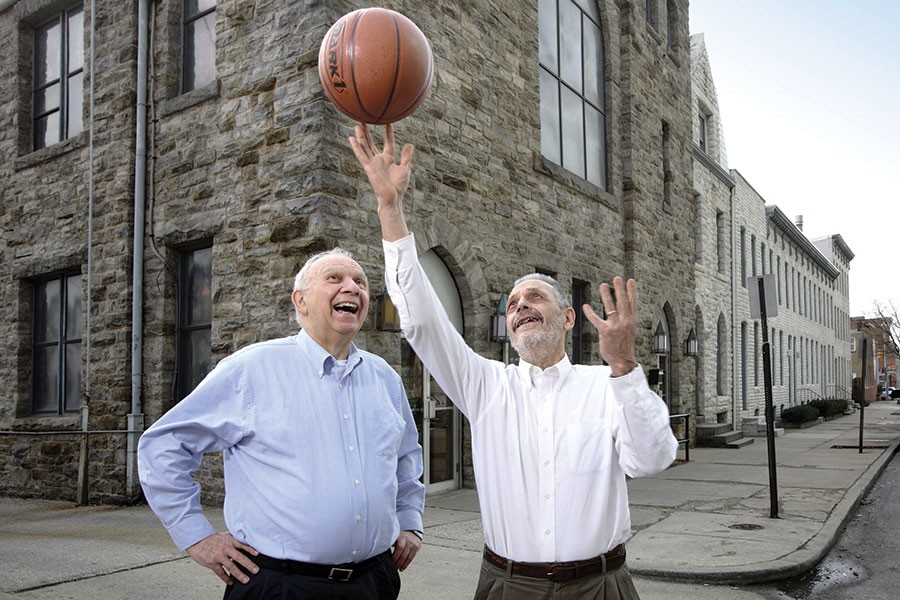 Simeon Margolis, Med '57, and John Boitnott, Med '57, were classmates at the School of Medicine—but it was their love of basketball that cemented their nascent friendship. After class on weekdays and on Saturdays, they headed to a church-turned-gymnasium on Washington Street to clear their heads with a game of basketball.

They weren't just throwing the ball around. Former college players, they took the game seriously. Boitnott had played at Bridgewater College in Virginia, and Margolis—whose childhood nickname "Moan" has stuck with him—was a starting player as a Johns Hopkins undergraduate. (Margolis still holds the single-game scoring record: 44 points, achieved in 1953 against Randolph-Macon College. In 1997, he was inducted into the Hopkins Hall of Fame for both basketball and baseball.) With some other med school classmates, they scrimmaged—and often won—against local teams, including the Johns Hopkins varsity squad.

"[Basketball] certainly was the thing that really pulled us together," Boitnott says. "There were some other things that kept us there." Among those other things was a deep and broad interest in science and medicine that wasn't limited to their respective specialties—biochemistry for Margolis, pathology for Boitnott. "Moan was a very good student and a thoughtful person who was basically interested in medicine and science. He was really, at his very core, deeply interested in this stuff. And I was too," Boitnott says.

Both ended up spending their careers at Johns Hopkins. Margolis is professor emeritus of medicine and biological chemistry at the School of Medicine; he has also written about consumer health for Johns Hopkins publications, The Baltimore Sun, and Yahoo! Health. Boitnott is the former pathologist-in-chief at Johns Hopkins Hospital and a professor of pathology at the School of Medicine. On his walks around the East Baltimore campus, Margolis would sometimes spy Boitnott puffing on his pipe outside the Pathology Building, and the two would consult on medical issues and share family news.

Their wives and children—three daughters for Margolis and a son and daughter for Boitnott—grew close as well. Both families attended the Unitarian Universalist Church in Towson for a time. In 1969, they also took a joint family camping trip to Maine's Acadia National Park, during which they watched the lunar landing. And when Margolis' wife, Mary Alice, passed away from cancer in 2011, Boitnott spoke at the memorial service.

In each other, Margolis and Boitnott have found a true intellectual partner. "We're on the same wavelength no matter what we're discussing," Boitnott says. "We're coming from the same place."