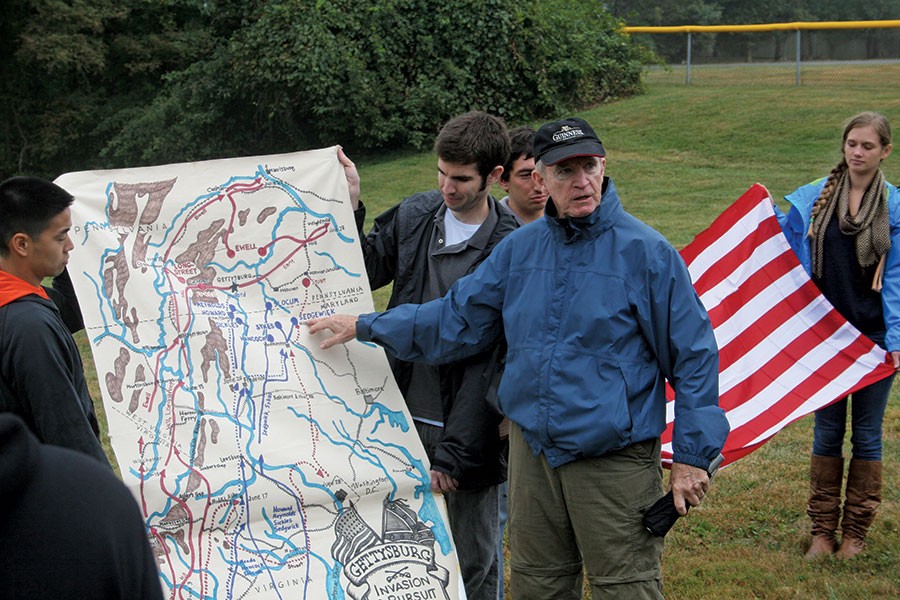 "She was very outspoken against Napoleon at a time when he had intimidated most other critics into silence, so she was very impressive for that," says Harvey. "I tried to play her as outspoken as she was in life."

The unusual assignment came about thanks to the SAIS staff ride program. Staff rides give students the opportunity to visit significant battlegrounds in the United States and abroad, where they role-play the experiences of politicians, generals, and civilians who were involved in the conflict. The expeditions help students understand strategic decision making by getting them into the mindset of historical figures.

Harvey has since donated $100,000 to an endowment set up specifically for the staff ride program. The founder of the program is hoping the fund will ensure that staff rides continue for years to come.

"Each year we think it can't get better, and each year it does," says Eliot Cohen, program founder and professor of strategic studies at SAIS. "Everyone has a role, and you're learning by throwing yourself into someone else's shoes, looking at their decisions through their eyes, and having collective discussions about what it all means."

Cohen organized the school's first staff ride 24 years ago. Originally, staff rides were a training technique used by the Prussian army in which army strategists—known then as the general staff—learned how to make operational decisions by studying historical battlefields, as well as some potential ones. This was, for the most part, done on horseback.

"We've really evolved it in a pretty remarkable way," Cohen says. Since the program's inception in 1991, students have undertaken some 60 staff rides. Every year, they organize three: two domestic and one abroad. Students have visited national battlegrounds like Antietam as well as more distant sites like Jerusalem (the 1948 Battle for Jerusalem) and Vietnam (the 1968 Tet Offensive). The SAIS students handle all the planning, from arranging buses and meals to publishing a 60-page guide that details the trip and includes a map collection. Students research the historical roles they'll assume and give presentations—at times decked out in period hats or other costume accessories—on their characters.

"I've had a number of general officers, former three- and four-star generals, go along with us and they will say unequivocally, 'This is much better than anything the military does,'" Cohen says.

Harvey, who is now studying for her doctorate at the Institute of Middle Eastern Studies at King's College London, warmly recalls her staff ride experiences. For the 2010 staff ride to study the Revolutionary War's Philadelphia campaign, she was one of two quartermasters, a military rank Cohen uses to designate a staff ride's lead organizers. She had already played Andrew Johnson for the Battle of Appomattox Court House, an earlier staff ride that examined the Appomattox campaign and post-war Reconstruction.

Harvey says she enjoyed the discus­sions that took place in her regular SAIS classes, "but the staff rides, of course, made it a lot more fun."

A two-day expedition of about 65 students to a local battleground like Gettysburg costs about $15,000, including research and prior-planning trips. Trips to international destinations cost roughly $100,000. Usually, students cover about 20 percent of a ride's expenses while SAIS benefactors make up the rest. "We ask for a student contribution, but that's really only a small fraction of what it costs," Cohen says.

In 2012, Cohen launched a campaign to raise $2 million for an endowment fund to ensure the future of SAIS staff rides. That fund has now reached roughly $500,000, thanks in part to Harvey's donation. "Philanthropy is something that my family values very highly, particularly giving back to our educational institutions," she says.

The next staff ride will be in March, when students will travel to Colombia to study that government's war against the leftist FARC guerrillas. Colombia's current minister of national defense, Juan Carlos Pinzón Bueno, is one of Cohen's former students.

"I like to say to my students as they leave, 'You get a lifetime warranty,'" says Cohen. "I think they reciprocate that. I think it's fair to say that when they leave, they really feel that they got something special at SAIS."

As for Harvey, she hopes her contribution will ensure the students of tomorrow enjoy a similar experience: walking some of the world's most important battlegrounds and examining the characters who helped shape our history. "I wanted this to be a high-impact gift, recognizing how important the staff ride is to the identity and cohesiveness of the Strategic Studies Department," says Harvey. "Professor Cohen won't be around forever, and everybody wants this to outlast him."