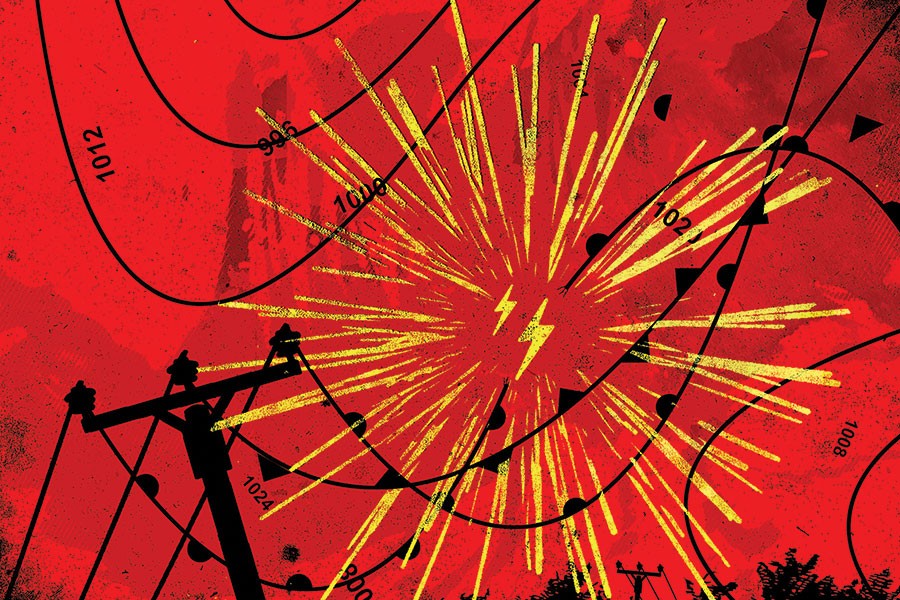 Until recently, residents of Northeastern cities like New York, Hartford, or Philadelphia could reasonably assume that chances were small that they'd lose power when a hurricane struck the Atlantic coast. Originating in the warm waters of the tropics, most hurricanes lost much of their potency by the time they'd churned as far north as New York or New England. This will not likely be the case much longer.

A study conducted by Whiting School Associate Professor Seth Guikema indicates that as the climate continues to change, many cities that have considered themselves unlikely to face storm-related power outages need to prepare for a new reality. "As these storms become more intense, they penetrate further [north and] inland before dying out, and you have new areas getting storms that haven't experienced blackouts before," says Guikema, who teaches in the Department of Geography and Environmental Engineering. "Utilities that haven't had to think about hurricane-induced outages now have to think about them."

Guikema developed his first blackout-forecasting tool, a short-term model, back in the mid-2000s and used it to predict power outages for Irene and Sandy days before those hurricanes came ashore. The latest version of the tool takes a longer-term look. While most climate change researchers agree that hurricanes will intensify as warmer sea surface temperatures give them more fuel, they disagree about whether storms will also become more frequent and whether the distribution of their landfall locations will be affected.

As a result, Guikema and his team strove to account for climate change with more of a scenario-based approach. They created a baseline case by applying Guikema's short-term model to a simulation of the storm variability observed over the last 112 years. Then, they altered the parameters of the baseline case to create 12 plausible climate-change scenarios, looking at what would happen if storm intensities were to decrease by 20 percent or increase by 20 and 40 percent. They also adjusted the model to account for potential changes in storm frequency and landfall locations and ran each scenario for the equivalent of 1,600 years' worth of hurricane activity.

According to the model, the 10 cities most likely to experience more power failures due to intensifying hurricanes are, in order of likelihood: New York, Philadelphia, Jacksonville, Virginia Beach, Hartford, Orlando, Tampa, Providence, Miami, and New Orleans. Other metro areas that should expect increased sensitivity include (in the same order) Boston, Houston, Richmond, Birmingham, Austin, Baltimore, Washington,  and Raleigh.

The team was not surprised to find that hurricanes will continue to pummel areas like Miami and New Orleans. (These cities fall relatively low on the top-10 list, Guikema explains, because their sensitivity is already at such a high level it doesn't have much room for growth.) What did surprise them was that many cities that have avoided hurricane damage thus far—because they lie so far inland or so far north, or because they have other geographic protection—are likely to face threats in the future. Guikema was especially shocked to realize that cities situated as far inland as the Appalachians may start seeing damage from hurricanes. "It stands out that the top five or so are cities you don't really think of as being target hurricane areas," says Andrea Staid, the Johns Hopkins doctoral student who authored the report. "If we choose to ignore climate change, our study shows the impacts could be quite severe going forward."

The two most at-risk cities, New York and Philadelphia, will likely see a 50 percent increase in the number of people who lose power during a 100-year storm (that is, a storm with a 1 percent chance of happening in any given year) due to climate change. "In historical hurricane environments, hurricanes tended to be dying out or weaker by the time they reached New York," Guikema says. "But if hurricanes get even 20 percent more intense, you're going to get more intense, stronger storms surviving into the city, and it's such a densely populated area [that] the potential is there for worse impacts. The biggest message for the cities in the top 10 is they've got to be thinking about this."

Guikema hopes his work will guide cities as they consider how to prepare their power grids for the future through methods that may include burying power lines, replacing wooden utility poles with cement, flood-proofing substations, and fine-tuning emergency response plans. Power outages have cascading effects on other infrastructure systems, like telecommunications and water networks, as well as on economics and human health. While the study will likely give some cities a wake-up call, it may prevent others from overreacting. The data show, for instance,  that Nashville, Memphis, Dallas, Pittsburgh, and Atlanta will likely remain in relatively safe zones. "If places don't have good estimates of what might happen," Guikema says, "there's the risk of preparing for very bad cases that may not be the best use of their resources."