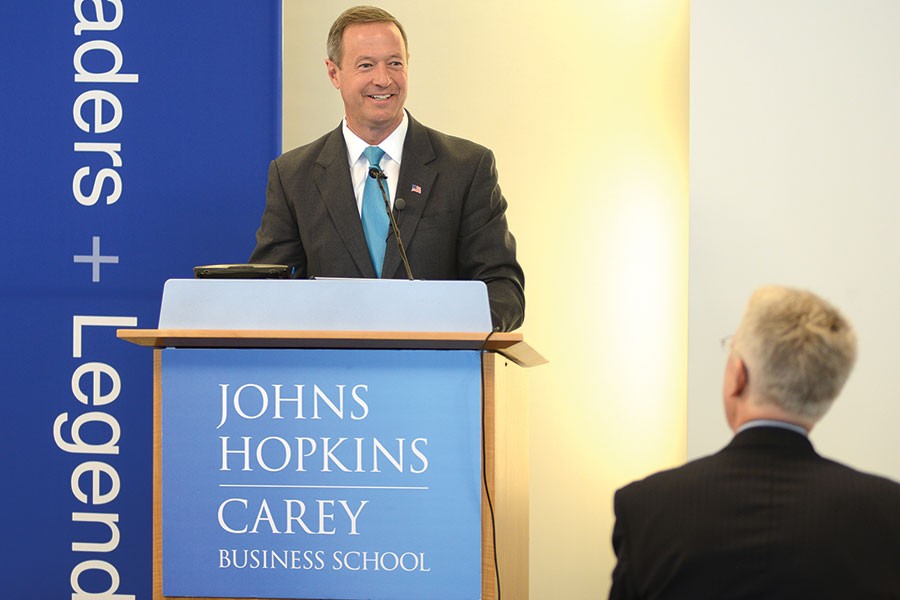 Former Maryland Governor Martin O'Malley has joined the Carey Business School as a visiting professor focusing on government, business, and urban issues. O'Malley will participate in classes on such topics as leadership, infrastructure, entrepreneurship, and ethics. He also will work with other faculty members and students on their studies of management in the government sector.

The former Baltimore mayor and City Council member will also be a part of Johns Hopkins' 21st Century Cities Initiative, involving faculty members from disciplines across the university brought together to study and propose approaches to issues affecting cities, including economic growth, urban education, violence, urban health, and support for arts and culture.

O'Malley, who began at Johns Hopkins in February, is known as an innovator in management for the public sector. As mayor of Baltimore and governor, he developed several data-driven management systems to track and report data on city and state government and the Chesapeake Bay.

"I am honored to join Johns Hopkins University, a world-class institution that has done so much for Baltimore and Maryland," O'Malley says. "As both a mayor and governor, I've worked to make government work better for all of our citizens through a relentless focus on data and transparency. Our efforts got results—driving violent crime down to record lows, recovering 100 percent of the jobs lost during the recession, and restoring the health of the Chesapeake Bay for generations to come. I look forward to sharing management insights from these past two decades with the next generation of leaders at Johns Hopkins."