Meet Jay Lenrow, the new president of the Alumni Association

Living in Baltimore, Jay Lenrow, A&S '73, never imagined his daughter would want to stay in town and attend Johns Hopkins University. While looking at colleges, Liz, Engr '10, nixed schools in Pennsylvania and Virginia because they were "too close" to home. When she decided Johns Hopkins was the place for her, dad was proud but surprised—though not entirely. 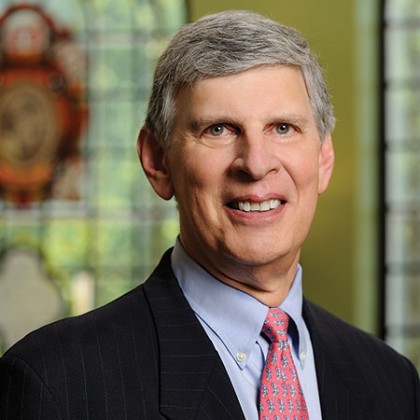 After all, Lenrow has such fond memories of his time here. He arrived in the fall of '69, during the Vietnam War. From war protests on campus to Johns Hopkins' admitting women, seismic changes were happening here and across the country. In 1971, Milton S. Eisenhower returned as interim university president. Lenrow recalls Eisenhower's open-door policy and long discussions with the youngest brother of the U.S. president in his living room. It was an exciting time to be at Johns Hopkins.

Nearly 30 years later, Lenrow saw the school from another perspective—his daughter's. "It was a different experience than I expected," says the new president of the Johns Hopkins Alumni Council. Hopkins had been coed for years and was now 2.5 times the size. Programs like the Spring Fair and Milton S. Eisenhower Symposium, which both began when Lenrow was a student, were now can't-miss events.

Much of Lenrow's mission as president stems from observing Liz's student and alumni years, how Hopkins has evolved since he attended college, and how it can keep getting better.

Johns Hopkins has always been an integral part of Lenrow's life. An attorney in private practice in Baltimore, Lenrow was a founding member of the Second Decade Society (the Krieger School's leadership development organization) and currently serves on the university's board of trustees. He has served on the Alumni Council's Steering Committee and has attended every five-year class reunion since his first one in 1978.

In the two years ahead, Lenrow plans to encourage other alumni to become just as active in the Johns Hopkins community. "We're going to bring a lot more alumni to the point where they feel we truly represent them," he says. Already, Lenrow is boosting communication on social media platforms and through one-on-one meetings with student and alumni organizations from all divisions—a "listening tour," as he calls it, similar to his college chats with Eisenhower. The feedback he receives will inspire new programming and goals for the association, which will strengthen the bonds alumni have with one another—important because alumni mentors "give grads a tremendous leg up when entering the work world"—as well as with Hopkins administrators and future students.

"Nobody does everything completely on their own," Lenrow says. "We all stand on the shoulders of those who come before us. Whether a student, a young alum, or an older alum, we are all Hopkins."