Relatives of horses & rhinos found in Indian mine

An active, open-pit coal mine is an unconventional place to conduct a paleontological dig. But for a team of Johns Hopkins researchers and native colleagues working in India, one such coal mine has been a gold mine of fossilized bones and teeth that have led to a breakthrough: the first concrete proof that the closest relatives of horses, rhinos, and other members of the mammalian order Perissodactyla were present on the Indian landmass more than 50 million years ago while it was an island and not yet joined to Asia. 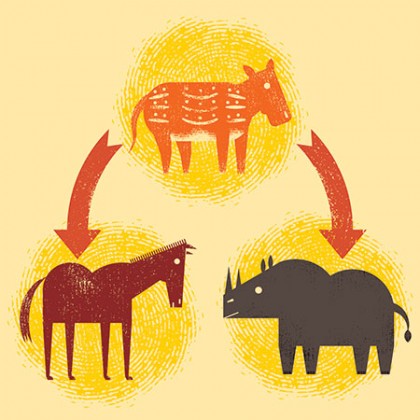 Fossilized remains of the order—also known as odd-toed ungulates owing to their unique foot structure—are found throughout North America, Europe, and Asia. Scientists have long understood much about their evolution, but the fossil remains from the Indian pit (those that weren't pulverized by mining machinery) form the likeness of a forebear more primitive than anything yet discovered. The animal has been named Cambaytherium thewissi and probably weighed between 50 and 70 pounds. "We have more than half of the skeleton, and we can make a reasonable life restoration," says team member Ken Rose, a professor in the School of Medicine's Center for Functional Anatomy and Evolution. "What we are speculating is that it  is a descendant of the ancestral form that would have given rise to all Perissodactylas. It's never been found anywhere but India."

Scientists date the remains to around 54.5 million years ago. While anatomically the least evolved of Perissodactylas, they are not the oldest. Older remains of more developed members of the order have  been discovered as far from India as Wyoming. For a theoretical explanation of this seemingly odd dispersion, you have to go back much further in time, some 80 or 90 million years, when plate tectonics broke the Indian landmass away from the erstwhile supercontinent Gondwana and  India began to drift northward  as an island. Animals confined to this orphaned landmass would have been subject to unique evolutionary forces. "It's often thought that when areas are isolated, new life forms evolve," Rose says. "Something was going on in India, something really interesting, and it could be related  to the isolation."

Rose and others further theorize that India's isolation might have had periodic interruptions during its 30– 40 million year migration northward. Before India slow-crashed into Asia (an event that produced the Himalayas), temporary land bridges might have periodically formed between it and Africa or the Arabian Peninsula to the west. These would have provided Indian animals with migratory contact with the wider world prior to the collision with Asia. "And so animals got on India, evolved to the forms that we recognize, and then got off again and repopulated the Northern Hemisphere," Rose says.

While the large mine where these unique fossils were discovered has been closed and sealed over, Rose will be visiting smaller Indian mines nearby this spring to continue searching for clues. "It's noisy and hot, so we don't work there very long at a stretch because it's probably not very healthy," Rose says of their work, done on small patches of exposed earth to which mine operators grant them brief access amid the tumult of coal extraction. "There are occasional landslides of loose material, and probably each one of us has been hit by some falling debris. Fortunately, nothing too big."