Two days into my new job as New York City program manager at Girls Who Code, I sat around the table with my eight colleagues faced with a problem I had not dealt with in any of my previous positions. My challenge was to build a "bug bot," an animated digital bug that could sense a black line on a computer screen and follow it, no matter the size or shape. 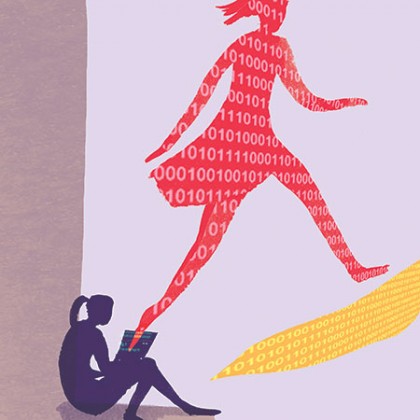 As our fearless instructor bounded around the room, she encouraged us to break the problem down into the smallest steps imaginable. There we were, walking around the conference room pretending to be a bug bot following a line, all the while jotting down notes about our movements and thought processes. After three hours of brainstorming, I had to write just six lines of code to make my bug follow the line—any line, infinitely.

I joined Girls Who Code not as a coder but as a feminist from a background in STEM and education nonprofits. In my role, I face challenges daily—managing a team, monitoring budgets, running operations, and building partnerships, but before that day my brain had never been forced to consider a problem in a new way, with rigorous logic and no room for interpretation or ambiguity.

Since building my bug bot, I've built everything from email parsers to a fully functioning Asteroids video game. I spend hours debugging my programs, participating in online forums, and working with fellow students to become a better programmer.

Hundreds of high school girls across the country are on this journey with me. Their participation in coding courses like Girls Who Code's after-school clubs and summer immersion programs is crucial to ensuring the economic prosperity of women. Software engineers are some of the highest paid professionals coming out of college, and women are missing out on a huge economic opportunity because of factors like outdated curricula, social stigma, a lack of female role models, and the overwhelming portrayal of coders as masculine and geeky.

Today, women fill less than 20 percent of software engineering positions at the country's top technology firms. What's more, the U.S. Department of Labor estimates there will be 1.4 million job openings for computer specialists by the year 2020, yet U.S.-educated women are projected to fill only 3 percent of these jobs at current graduation rates. It is imperative that we encourage young women to pursue computer science education and careers in the tech sector.

But for me to embark on that mission, I had to start with myself.

Elizabeth Caudle, A&S '09, is the East Coast regional director of Girls Who Code.