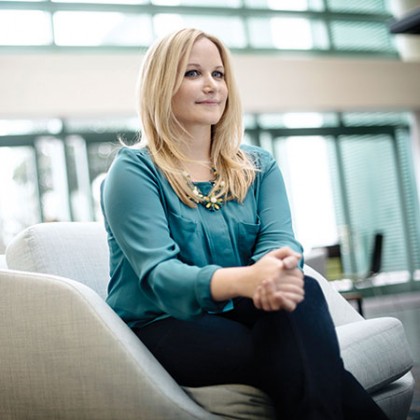 Dalia Ganz, A&S '05, moved to Los Angeles after graduation with hopes of finding a marketing job in television. She landed at ABC Family, where over the last nine years she has played a pivotal role in developing the network's social media strategy. As director of digital and partnership marketing, Ganz devises innovative ways to connect with fans of ABC Family's shows through Facebook, Instagram, Pinterest, Twitter, Snapchat, and other platforms. The results have been impressive: ABC Family boasts 49 million fans on Facebook alone, and its popular high-school drama Pretty Little Liars is the No. 1 scripted TV series on Twitter. Ganz and her team have a number of industry firsts under their belts, including releasing the first three minutes of Pretty Little Liars' winter 2015 premiere in segments via Snapchat. "We don't want to just have a basic presence," she says. "We want to do things that no network is doing."