Does the militarization of American police help them serve and protect? 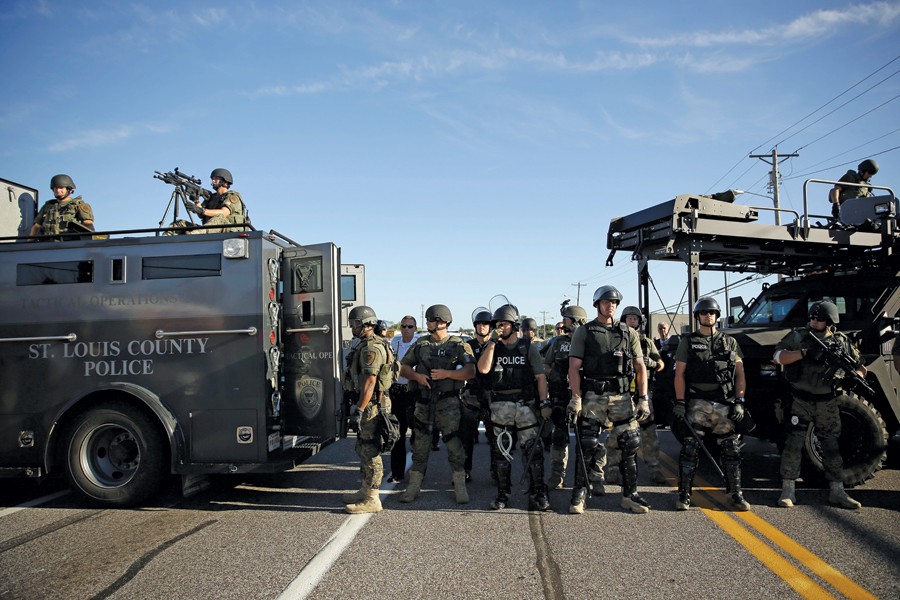 Kara Dansky spent the better part of the fall of 2014 talking about assault rifles, armored vehicles, and forced-entry tools. As senior counsel for the American Civil Liberties Union Center for Justice, Dansky, A&S '94, is the primary author of War Comes Home: The Excessive Militarization of American Policing, an ACLU report released last summer. It provides a succinct introduction to how the federal government has supplied American police forces with military weaponry for the past 30 years and how that equipment is being used today. She talked about the report online and in television and radio news programs. She wrote about its findings in op-eds for The New York Times and CNN.com. She discussed it in a series of posts on the ACLU's Blog of Rights.

But it took a major news event for the report to get noticed. It came out last June, but it wasn't until Michael Brown was killed by police officer Darren Wilson in Ferguson, Missouri, on August 9, 2014, that mainstream media started calling. The police response to the peaceful protests that followed Brown's shooting shoved the militarization of American police forces into the national spotlight thanks to images of officers in full battle dress pointing assault rifles at unarmed citizens.

"People wanted to know how this could happen in America," Dansky says during an interview at her Washington office in December. Prior to Ferguson, Dansky says initial press interest was about police forces having, say, mine-resistant ambush protected vehicles, aka MRAPs. "We were very careful to explain that, from our perspective, the militarization of policing has been happening in black communities to fight the war on drugs for decades. It's a systemic problem, it's not just a handful of MRAPs. And then Ferguson happened, and everybody was like, Oh, that's what you mean. So the conversation shifted from MRAPs to, How can this happen in America?"

War Comes Home provides a brief outline that answers that question. The ACLU has long examined incidents of excessive force and discriminatory policing tactics, and during her 2012–14  tenure at the ACLU, Dansky says the organization kept hearing anecdotal stories of SWAT raids gone wrong—pets killed, children injured, people killed—and decided to seek raw data about such deployments. In March 2013, the ACLU submitted public records requests to more than 260 law enforcement agencies in 25 states and the District of Columbia for incident reports and supplemental records documenting SWAT deployments for 2011 and 2012; by September 2013, the ACLU had received 3,844 records.

As background to understanding that data, Dansky and her ACLU colleagues researched the growth of SWAT teams in U.S. police forces, from the first one created in late 1960s Los Angeles, and looked into the federal programs that provide military equipment and in some cases incentivize its use by law enforcement agencies. In 1981, President Ronald Reagan's administration prompted Congress to pass the Military Cooperation with Civilian Law Enforcement Agencies Act. The legislation permitted U.S. military collaboration with civilian law enforcement in the growing war on drugs, including the sharing of information and facilities and training on and use of military equipment.

The National Defense Authorization Act of 1990 authorized the Department of Defense to transfer military equipment to law enforcement agencies "for use in counterdrug activities." This program led to the Department of Defense Excess Property Program (aka the 1033 Program). That one was created under President Bill Clinton by the National Defense Authorization Act for fiscal year 1997, and it authorized surplus military equipment to be sent to law enforcement agencies for, as the act states, "use in counternarcotics and counterterrorism operations, and to enhance officer safety."

These pipelines put military weapons into the hands of civilian cops. The Edward Byrne Memorial Justice Assistance Grant (JAG) program, authorized by the Anti-Drug Abuse Act of 1988 and reorganized in 2005, provided a monetary incentive for their use in anti-drug policing. Funding, which comes out of the Department of Justice, may incentivize arrests for low-level drug offenses and other ineffective crime-reduction strategies. Byrne funds can be used for a variety of services, but a 2014 AlterNet report documents an overwhelming majority going toward anti-drug policing.

The number of federal agencies, offices, or departments that gather incident report data about SWAT deployments is zero.

All these programs and acts were expanded following 9/11, a development that is discussed in the background of the ACLU report. The ACLU looked specifically at two years of data about SWAT deployments from about 255 law enforcement agencies. The graphics on the accompanying pages spotlight some of the report's findings—for example, that an overwhelming majority of SWAT deployments are to serve search warrants, a scenario for which SWAT teams were not created nor intended, and the majority of those warrants are drug search warrants served to people of color. This provides a snapshot of how SWAT teams use federal criminal justice money and the weaponry obtained from the Department of Defense. But the stat that should provide the most pause is but an estimate: There are more than 17,000 autonomous law enforcement agencies in the United States. Of those, an estimated 80 percent have SWAT teams. Collectively, those SWAT teams are estimated to be deployed between 50,000 and 80,000 times per year. And the reason those stats are qualified as "estimated" is that the number of federal agencies, offices, or departments that gather incident report data about SWAT deployments is zero.

"People are really shocked by the lack of data," Dansky says, pointing out that the data the ACLU received varied in consistency and depth, revealing that even at the local level there is no standard protocol for documenting deployment. "I think the events of Ferguson and the non-indictments in the Michael Brown and Eric Garner cases have shone a light on a problem that has deep roots and goes far back," she continues. "People in the [criminal justice] field have been complaining for a very long time about overpolicing in mainly black neighborhoods—particularly aggressive policing, specifically to wage the failed and wasteful war on drugs—and mass incarceration, which is basically our nation's addiction to locking up people in jails and prisons instead of providing constructive solutions. But those issues have not been on the radar of mainstream America for decades. Now, people are talking about these issues in a really constructive way."

She mentions a lawmaker in Pittsburgh who introduced legislation to prohibit the Pittsburgh police department from applying to the Pentagon for military equipment, some North Carolina counties that held public forums to talk about how citizens want policing performed in their communities, and a few communities that have sent their MRAPs back to the Pentagon. The federal government has started to address the oversight of these programs as well. In September, Senator Claire McCaskill of Missouri addressed the Senate Committee on Homeland Security and Governmental Affairs about these federal programs. A Senate Armed Services Hearing that month that reviewed these programs revealed that DOD, DOJ, and the Department of Homeland Security don't talk to one another about the money and equipment that go to police departments, which is ostensibly being addressed. And in December, President Barack Obama's office issued a report about these programs and gave his administration 120 days to develop an executive order that includes substantive reforms.

Obama's report was the first top-down evaluation of the 1033 Program in 20 years; Americans who are poor and/or of color have lived on the frontlines of America's drug wars since the 1980s, and the ACLU report presents a correlation between the militarized police forces—which a small cadre of academic researchers has been documenting since the 1980s—and the preventive policing of the drug war as de facto urban policy driving how law enforcement agencies interact with and consider themselves in the communities in which they operate. Both are in need of radical reassessment and reform.

"I think a lot of the public doesn't even know we're still fighting the war on drugs," says Dansky, who is now special adviser to the director of the Mayor's Office of Criminal Justice for New York City Mayor Bill de Blasio. "I think the public is weary of it and is tired of spending money on it. And I think people are really tired of seeing drugs as an evil that needs to be combated with the criminal justice system and specifically with weapons made for combat.

"People don't want their neighborhoods to be treated like war zones," she continues. "And the people are already demanding change."