When the news broke last year that Johns Hopkins University had lost one of its finest, Al Freeland knew he had to do something besides mourn the passing of Wilson Fewster. 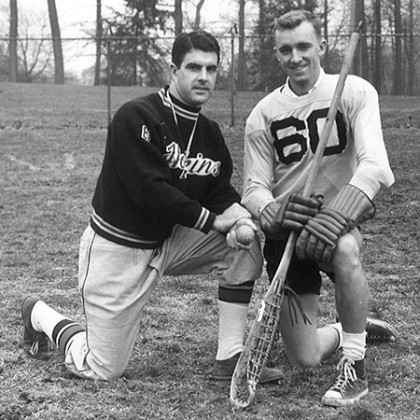 Image caption: Coach Wilson Fewster had a tough-guy reputation, but his incredible leadership sparked an outpouring of support for a memorial fund in his name. Fewster, left, poses with legendary lacrosse coach Bob Scott.

During his nine seasons (1957–65) as head football coach at Hopkins, Fewster, A&S '50, made an indelible impression on Freeland, one of the Blue Jays' top players during Fewster's most successful years on the sidelines. Before he became a successful hand surgeon, Freeland, A&S '61, HS '68, '69, Med '70 (PGF), was a starting tight end and linebacker on the Hopkins teams that won back-to-back Mid-Atlantic Conference titles in 1959 and 1960 and a Mason Dixon championship in 1959.

"Coach Fewster didn't get too close to his players," Freeland recalls. "But a year after I graduated, he called me and invited me to dinner. From there, we stayed in touch over the years. He'd come to team reunions. I sent him holiday cheese every Christmas. When he passed, I really wanted to do something to honor him."

Freeland consulted current Johns Hopkins football coach Jim Margraff and Athletics Director Tom Calder. They agreed the most fitting way to make Fewster's name live on at Homewood would be to invest in the program's future coaches. So during the summer of 2014, Freeland wrote 350 letters seeking donations from alums, including his Class of '61 teammates. The goal was to raise $250,000 and establish the Fewster Assistant Coaching Fund, which each year would support a young Hopkins coach breaking into the business.

By July of 2015, nearly $200,000 had been raised. "We've gotten contributions from nearly 100 former players," says Freeland, who has been retired as a surgeon for 10 years. "That shows you what people thought of [Fewster]. I called him Fewster the Rooster, since he was king of the barnyard. What a shrewd tactician. He was a very confident, humble, and modest guy, a straight-up role model."

"I was overwhelmed by the alumni support," says Grant Kelly, director of development for Johns Hopkins Athletics. "Al Freeland's leadership sparked an outpouring of support among his former teammates, and they have created something very special for Hopkins football."

Dan Wodicka, Engr '14, the former Blue Jay wide receiver who is the school's all-time leader in career receptions (260), will receive $10,000 as he enters his second year coaching receivers under Margraff. The least-experienced assistant on Margraff's eight-man coaching staff, Wodicka will be able to defray living expenses as a result of the fund's first disbursement.

"Coach Margraff sat me down last year and told me this is the [low-paying] lifestyle of a young coach," says Wodicka, who earned a degree in biomedical engineering but quickly gravitated back to his favorite sport. "This is what I want to do more than anything else. I am excited and honored by this."

"You need to struggle early to see if coaching is what you really want to do," says Margraff, who tended bar at night to pay bills during his rookie year as an assistant at the University at Albany in 1985. "Al Freeland wanted to do something nice in Coach Fewster's name," Margraff adds. "What a great idea to help a young guy get his foot in the coaching world."

Fewster, who died on June 11, 2014, at age 87, made a huge impact at Johns Hopkins in football and lacrosse as a coach, and in lacrosse as a player. He was a three-time All-American in lacrosse and a member of the Class of 1950 lacrosse team. That class went undefeated over four years against collegiate opponents while winning four U.S. Intercollegiate Lacrosse Association National Championships. Fewster was inducted into the National Lacrosse Hall of Fame in 1980 and to the Johns Hopkins Athletic Hall of Fame in 1998. Fewster was also the Blue Jays' head lacrosse coach in 1952 and 1953. He assisted the legendary Bob Scott when Hopkins won national titles in 1957 and 1959.

Jim Greenwood, Engr '61, one of Freeland's former teammates, was a two-sport athlete under Fewster—a wingback and cornerback in football and a two-time All-American goalie in lacrosse. Greenwood fondly recalls spending lots of one-on-one time with Fewster after lacrosse practice doing extra work in the goal. "Wils was a born leader and tough guy," Greenwood says. "He'd also spend 45 minutes with me after practice every day. He made it fun working with you. He made me what I was. When Al stood up and said let's do something for football and for Wils, I got right on board with it."