Jonathan Flombaum brings up a scene re-enacted in hardware stores every weekend. Someone confidently selects a can of touch-up paint for a hallway or bedroom wall, returns home— and finds it doesn't match the wall. "If I look at the wall, I think, 'Oh, I know exactly what color that is,'" he says. "And then I walk into the store and suddenly realize that I'm screwed. I'm looking at 100 different paint chips, and I have no idea. It's a very salient experience when thinking doesn't work as perfectly as we might expect." 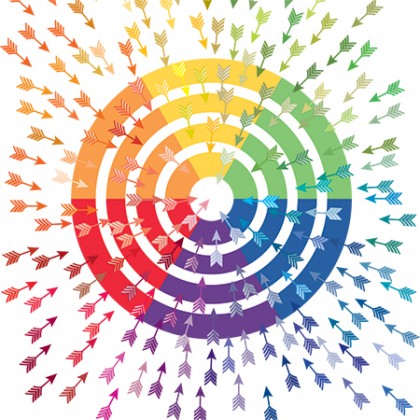 Flombaum is a Johns Hopkins cognitive psychologist, and his interest in this scenario goes much deeper than interior decorating. He has studied how people remember color and what that says about how the brain works. In a recent series of experiments, he asked research subjects to examine a color wheel of 180 different hues. "Indicate what you think are the best examples of blue, pink, purple, orange, yellow, red, and green," he told them. Most people selected the same colors, which told Flombaum that people tend to have similar ideas about the most exemplary version of a color. There may be many tints, tones, and shades of blue, for example, but there is one blue blue.

Then Flombaum's team set up a second test. With a new group of volunteers, the researchers flashed a single color on a computer screen, then later asked them to look at the same 180-hue color wheel and identify from memory the color they'd seen on the computer. Most participants did not point to the specific hue they'd actually viewed, but to colors that the first group had described as the "best" color for each category. The subjects had been shown turquoise but remembered basic blue, saw coral but remembered pink. This bias became stronger as more time elapsed between seeing the original color and choosing its match from memory.

Flombaum says the human visual cortex may be perfectly capable of distinguishing a vast array of colors, differentiating sea green from viridian from shamrock. But it appears the brain is wired to remember specific colors—and possibly other sensory responses like smell, touch, and taste—by placing them in general categories, in this case "green." It's as if there were two languages: one very sharp in its distinctions of perceived color (what the brain makes of what the eyes see) and the other comparatively blunt in what it can store in memory. "The brain always wants to describe the world in both blunt terms and sharper, more detailed ones," he says. "When we retrieve information from memory, the brain tries to utilize both kinds of descriptions, though they may not always align perfectly."

Flombaum hesitates to speculate why human brains evolved this way, but he does hypothesize that it's how we're programmed to deal with information based on previous experience—what statisticians refer to as a "prior." "Your brain uses a very good statistical trick to deal with the uncertainty that's inherent in perception," he says. "Your brain tends to think that things you've seen before are more likely." For example, imagine wandering in a field of strawberries. You expect them to be red. But, Flombaum says, "if I managed to make a strawberry that was at the boundary between red and purple and you saw it briefly and later I asked you what color it was, it would make sense that you would be drawn toward the red side of possibilities because it's unlikely that the strawberry was purple."

Flombaum, who refers to his workspace as the Visual Thinking Lab, intends to investigate how people respond to being tasked with remembering multiple colors shown at the same time. "In general, we want to know in my lab what is it that makes thinking imperfect," says Flombaum. "I mean thinking in general, all mental computation. The perspective in my lab is that what we often associate with the difficulty of remembering something is not keeping it there, but [actually] the computational difficulty of finding the right information in your brain and doing the right computations with it." Or, as it says on his lab's home page, "Why is thinking hard?"