Student engineers have designed a device for portable Parkinson's therapy

In summer 2014, Johns Hopkins biomedical engineering graduate student David Blumenstyk observed deep brain stimulation surgery performed on a Parkinson's patient at Johns Hopkins Hospital. Often a last resort for sufferers of the degenerative disorder, the procedure involves making a small hole in the skull to implant leads, mostly in the subthalamic nucleus area. The leads are connected to a pulse generator— a sort of brain pacemaker placed under the skin—that sends electrical signals to block abnormal firing of neurons and reduce the disorder's trademark symptoms: tremors, rigidity, slowness of movement, lack of sleep, and depression. Blumenstyk and his student colleagues were at the hospital in search of a worthwhile medical design project. They were struck by the invasiveness of the DBS procedure, which can take 10 to 15 hours to complete and risks side effects ranging from infection and speech impairment to loss of some cognitive function. They wondered if there might be a safer, less invasive way to provide a similar level of treatment. 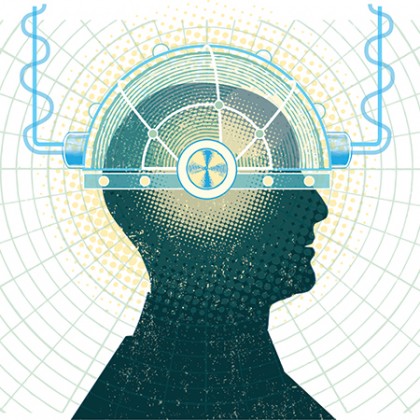 Johns Hopkins neurosurgeon William Anderson referred the students to Yousef Salimpour, now a research associate in the functional neurosurgery lab of the School of Medicine's neurosurgery department. Salimpour has looked into noninvasive Parkinson's therapies. One promising therapy is transcranial direct current stimulation, a painless treatment in which a low-level current is passed through two electrodes placed over the head to tweak the electrical activity in specific areas of the brain. The technique can be used to excite or inhibit cortical activities. "We know if we stimulate the deep structure of the brain, we can reduce Parkinson's symptoms," Salimpour says. "But we also know the source of the symptoms is not the deep structure; it's mostly in the motor cortex, the site of the tremor. So the idea was: Why don't we stimulate this part of the network? The motor cortex is more accessible than the deep structure, and the procedure [would be] less invasive."

Reduce Parkinson's symptoms without medications and without cracking a hole in the skull? That's a therapy worth pursuing.

The concept of electrical stimulation to affect nerves and muscles is centuries old and might have provided the inspiration for Mary Shelley's Frankenstein. But in 2000, scientists found a way to evaluate the efficacy of electrical brain stimulation that made this approach a prime target for neurological disease therapy. In a recent study, set to be published in The Journal of Neuroscience, a cohort of 40 Parkinson's patients who presented symptoms on their right sides were given either a 20-minute transcranial stimulation once per day or a placebo "sham shock." The researchers measured symptoms before and after, and they found that those who were given the actual stimulation reported significantly reduced motor symptoms for up to one full day, with no side effects aside from a slight tingling on the skin at the start of the treatment. "It's like an effective daily medication. We notice reduced tremors and positive changes to rigidity," Salimpour says. "But it's temporary. We don't do a permanent change in the brain."

Promising results, but to date treatment has been lab-based and confined to those in the study. The transcranial direct current stimulation device used is a clunky rectangular box that needs to be operated by trained technicians. The engineering student design team—Blumenstyk, Ian Graham, Melody Tan, Erin Reisfeld, and Shruthi Rajan—proposed to Salimpour an easy-to-use, home-based device and developed a prototype as part of a yearlong master's project. The result was a battery-powered, headband-shaped device dubbed STIMband. It features two spongey electrodes that deliver two milliamps of stimulation to regions of neural motor activity on the left and right side of the brain. One electrode is positively charged and the other negatively charged in order to induce a change in the target cortex. The patient would activate treatment by touching a large "on" button, then undergo 20 to 30 minutes of stimulation, viewed as a safe window of exposure. "We wanted to make this therapy mobile," says Graham, who has since graduated and is now working with St. Jude Medical, a medical device company. "The patients didn't want to come in every day to get the treatment, and many don't live in Baltimore. So we wanted to design something that could be used in a home setting for not just those who required [DBS], but those with moderate and early onset symptoms."

Although the device has not yet been tested on humans, the functional part of the system is identical to the lab-based transcranial stimulation device. Why it is effective remains a mystery. "We don't have a good reason why this technique works, and the same goes for the deep brain stimulation," says Salimpour. "But if it's successful for the person with Parkinson's, you don't care. At this moment, we have no cure and we can't stop the progression of the disease. So the point is, can we find ways to bring the quality of life back?" Salimpour says the next steps are optimization and long-term human studies, which the team hopes to begin soon. They need to determine the optimal placement of the device, the current (intensity) level, and the right duration of stimulation. "Maybe we boost the power. Maybe they get stimulated for 40 minutes. We just don't know," he says. He's optimistic about the device's potential. "This is not a miracle. This is not a solution for everything. But if we can improve this system and get it to market, I have faith that a patient's quality of life can improve."