The alumni guide to Los Angeles 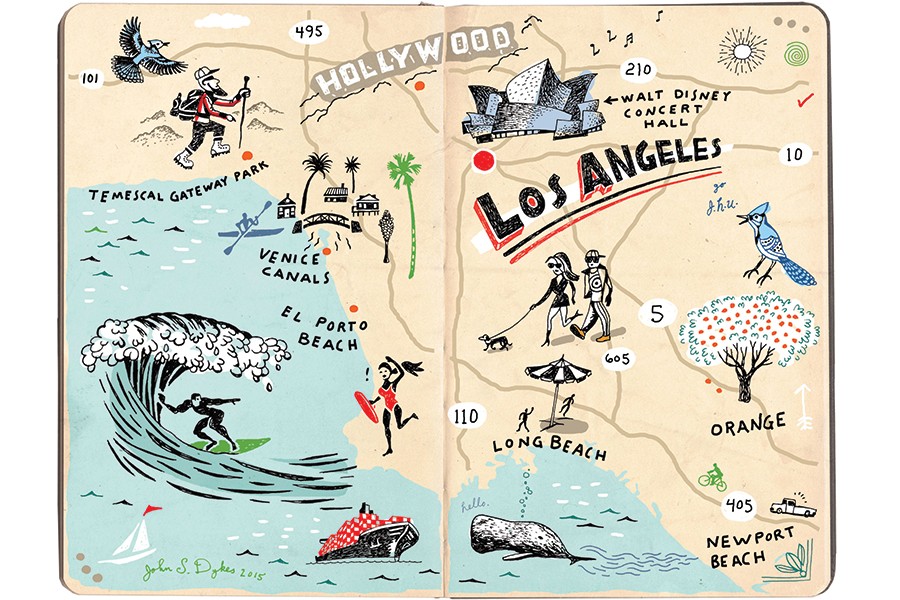 Where else in the world could the raw beauty of nature be so intricately blended with the man-made than Los Angeles? Even the legendary sign proclaiming the city the motion picture capital of the world—HOLLYWOOD—looks down from a rustic 4,000-acre park. "Los Angeles is a place where you can enjoy the outdoors by skiing in the morning, surfing in the afternoon, and having a world-class open air meal later that night," says attorney Emery Laiw, A&S '95, president of Hopkins Los Angeles, an alumni chapter boasting more than 2,400 members. "That's the versatility of the city." Laiw and fellow chapter member Bijan Olia, a film and television composer, Peab '11, '12 (MM), offer up these suggestions for those looking to take advantage of both the natural beauty and engineered excitement of L.A.

Plunge into California's coastal life with an introduction to surfing at El Porto Beach, one of the most popular areas to ride waves and near several surf schools. If the water's too chilly, head north to hike trails that offer stunning views of both the city and coastline at Temescal Gateway Park.

Afterward, hit the Venice Canals, a peculiar housing district built in 1905 that mimics the original Italian channels. With footpaths and bridges spanning individual canals, it's an easy walk that rewards with scenic homes and gardens. Spice things up with dinner in L.A.'s Thai Town—Los Angeles is home to more people from Thailand than any other city outside that country, and Olia recommends Ruen Pair for its coconut chicken soup, pad thai, and papaya salad.

Top off the evening with live music and drinks overlooking the city at the rooftop lounge Perch; Laiw says it offers impressive views of the downtown skyscrapers.

While visiting, don't miss the chance to attend a concert at the Frank Gehry–designed Walt Disney Concert Hall, a stainless steel wonder of sound and design that looks like a pile of wind-blown loose-leaf papers. "The pomp and circumstance and the power and the presence of the music make this an unforgettable experience," says Olia.