Anthropologist Richard Baxstrom smiles when he talks about how a nearly century-old film freaks people out today. For the past five years, he and colleague Todd Meyers have studied the 1922 silent film Häxan, which Benjamin Christensen, the film's Danish director, billed as a documentary of witchcraft. In the decades since its limited release, it has become an obscure oddity, known more for its wild imagery—women under Satan's spell, a ritualistic orgy, Satan churning butter in a scene of blatant onanistic excess—than for its content. And Baxstrom likes to watch how his students, who assure him that there's nothing they haven't seen, react when he screens it in class. "The heebie-jeebies come to them unexpectedly," Baxstrom says. "And then they divide. Half of them are absolutely excited and the whole rest of the course pales by comparison. And the others are just happy to leave it behind. But nobody's neutral. I've never seen anyone be like, meh." 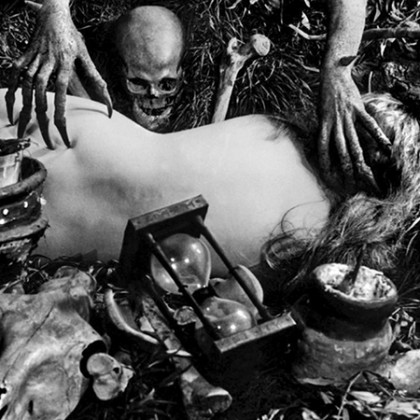 Häxan has flummoxed audiences since its first showing. An excerpt of a 1922 Variety review says ma ny of its scenes are "unadulterated horror," before adding that "wonderful though this picture is, it is absolutely unfit for public exhibition." British film critic Jonathan Romney, writing in The Guardian in 1994, calls the film a "delirious mix of historical tableau and lantern lecture," and says Christensen "lays on the hobble and bubble and leering Bosch demons." The film was banned in the United States, though in 1968 an edited version was released featuring a jazz score and narration from William Burroughs, which amplified the film's weird status. It remained infrequently seen and written about until it was restored and rereleased on DVD in 2001 by the Criterion Collection, whose press materials claim, "The film itself is far from serious—instead it's a witches' brew of the scary, gross, and darkly humorous."

Baxstrom, A&S '06 (PhD), and Meyers, A&S '07 (MA), '09 (PhD), who have collaborated on writing projects since grad school, believe otherwise. The film left them speechless at first, but they wanted to get past the initial shock. That's what anthropologists do: confront something outside their ken, but open their minds to the probability that there's a logic to what seems initially foreign. "So we were trying to figure out, What was Christensen trying to do?" Meyers says.

Their answer to that question appears in their new book, Realizing the Witch: Science, Cinema, and the Mastery of the Invisible, out October 31 from Fordham University Press. Baxstrom is a sociocultural anthropologist and University of Edinburgh lecturer, and Meyers is a medical anthropologist and Wayne State University associate professor. Häxan offered them a chance to take a deep dive into a singular film and director. They quickly learned that Häxan's intellectual pool was much deeper than they had imagined.

In the film's original program notes, Christensen included a bibliography of more than 60 sources he consulted to create the images and narratives. They ranged from 15th- and 16th-century texts about witchcraft (such as the church inquisitor's handbook Malleus Maleficarum) to late 19th- and early 20th-century writing about psychology and neu­rology (including Sigmund Freud, Carl Jung, and French neurologist Jean-Martin Charcot).

Baxstrom and Meyers followed Christensen's research, trying to trace how he translated what he read into a visual language. They began to note where certain compositions in the film allude to depictions of demons in medieval art. And they started to put Christensen's research into the context of Europe reeling from the psychological devastation of the era. "It's really in the wake of the First World War that [Christensen is] collecting and analyzing his source material," Meyers says, adding that during this time, two different understandings of hysteria had been popularized. One was the long-standing catchall for an emotional condition that afflicts women. The other was the fugue state that befell soldiers traumatized by their war experiences. Neither had been adequately addressed by medical science. "We don't talk about it a lot [in the book], but some of Christensen's source material comes from people we now would call 'spiritualists.' It was a world hungry for explanation."

The scholars began to see Häxan as Christensen envisioned it: a cinematic argument that what the church had called witchcraft was really undiagnosed hysteria. It's a point of view that positions Häxan less as a cinematic oddity and more as part of a continuum of expressive ethnographic films that extends from the mid-20th-century works of Jean Rouch up to the immersive 2012 deep-sea fishing documentary Leviathan produced by Harvard University's Sensory Ethnography Lab. "On first view, Christensen's claim that this is a nonfiction film feels completely insane," Baxstrom says. "We took that claim seriously, and I think that what's happening nowadays is people are taking seriously the idea that film makes possible a different kind of knowledge production."

At 273 pages, Witch carves a dense path from Häxan to contemporary thoughts on epistemology. At first it feels like a familiar kind of film book—a heady exploration of a filmmaker through his most infamous film—but Baxstrom and Meyers soon veer into explorations of documentary film language, discuss the idea of evidence in the modern social sciences, and even locate common intellectual ground between medieval church inquisitors and anthropological fieldwork today. And if that means their book is a bit vexing at first, that's OK. The movie inspired the ambition they put into it. "[Häxan's] reviews at the time seemed to be struggling with just what this thing is," Baxstrom says with a laugh. "I hope we captured that spirit of the film in the book. I mean, yes, I hope the book gets a good reception. You want more people to engage with the film and like it. But if at some point somebody doesn't say, 'What the hell are these guys on?' I'll be a little disappointed, to be quite honest."