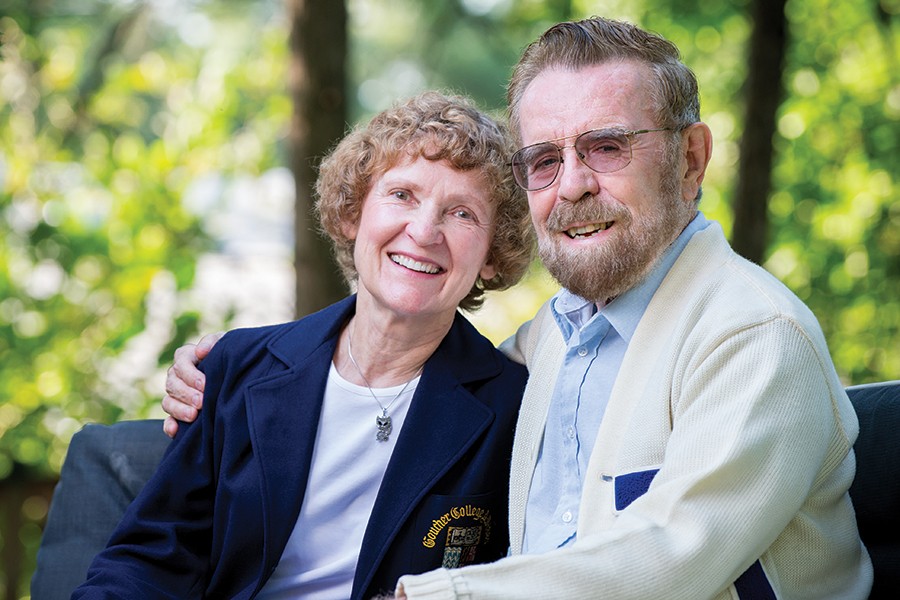 Image caption: Angie and David Boyter show off their school spirit—David in his fencing letterman sweater and Angie in her now-vintage Goucher blazer.

David Boyter, A&S '64, and his wife, Angie, Engr '68 (MS), '74 (MSE), went to the 1962 Hopkins homecoming lacrosse game as part of their first date. Just don't ask them what the final score was, or even what team the Blue Jays played that spring day. Those pesky details are lost. "But it was absolutely the best first date I ever had," Angie says, sitting beside David on the porch of the Ellicott City, Maryland, home they've shared for over 45 years.

She was going to Goucher College at the time and the pair had met through the Gouchkin Hoppers, a square dance club that united students from then all-male Johns Hopkins (undergrad, at least) and then all-female Goucher. David recalls finding himself dateless as the school's big spring dance, the al fresco Starlighter, drew near. A friend suggested he ask Angie. Another friend quickly shot down that idea, retorting, "Oh, she'd never go out with you." When Angie heard about this quick dismissal of the pairing, it made her determined. "I was to go to that Starlighter with him if it was the last thing I did," she recalls.

As first dates go, it was a marathon. David played trumpet in the marching band, and all the musicians and their dates were invited to an alumni crab cake lunch. Then came the game, where the band entertained (and the record shows that the Jays lost to Maryland, 16-15). Next, dinner at a Chinese restaurant and, finally, dancing beneath the stars.

"I had on a beautiful, blue strapless dress—do you remember that?" Angie asks. David nods. The night ended with the pair zipping north in David's MG convertible to get Angie back to her campus before curfew. With time to spare for a goodnight kiss. Or two.

Once she started dating David, a physics major, Angie added some physics and math classes to her English major's schedule. After graduating in '64, she was hired by the National Security Agency because she had tested so well in math (and with the agency's support, she later attended Johns Hopkins to earn her two graduate degrees). Both Boyters ended up with long careers at the NSA, retiring early to enjoy travel and robust civic engagement in Howard County affairs.

The pair was back at Homewood last year for alumni weekend and David's 50th reunion. "I was asked if I could bring my trumpet—but, oh God, I haven't played in so many years," David says. It's a whole different academic and social world on campus these days, but Angie takes the changes in stride: "I like to think that it's not that our Hopkins traditions are gone but that the students have got new ones."