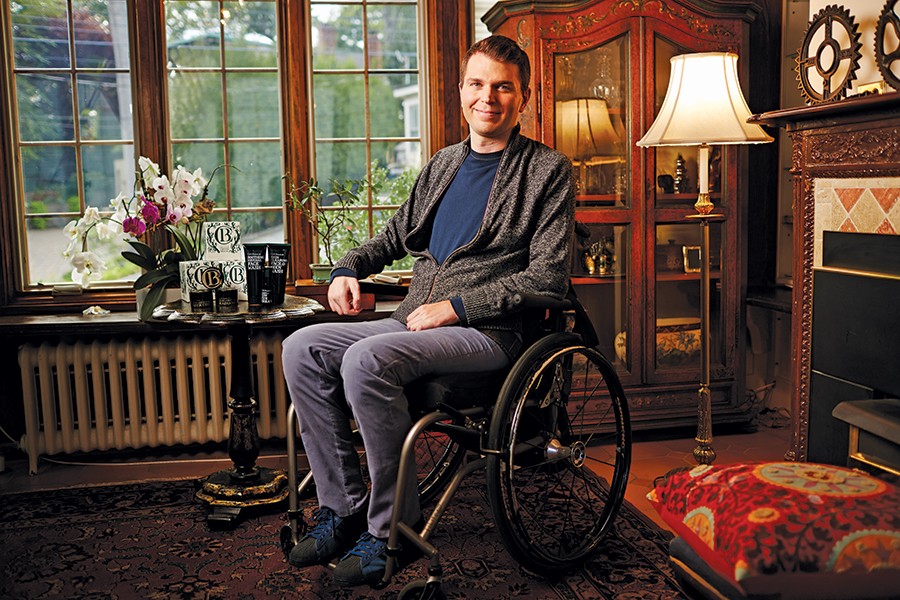 Francesco Clark, A&S '00, was 24 when he suffered a paralyzing spinal cord injury. That tragedy in 2002 launched an unexpected career—as a beauty entrepreneur—after his impaired nervous system triggered severe skin problems. Six years later, he founded Clark's Botanicals, a natural skin care line now sold at 180 stores worldwide, on QVC and Amazon.com, and through the popular Birchbox subscription service. His products are a hit with celebrities, with A-list fans ranging from Madonna to Michelle Obama. Clark donates a percentage of proceeds to the Christopher & Dana Reeve Foundation, where he serves as a national ambassador to raise awareness and give hope to others with disabilities.

What drove you to start making skin care products?

I was working at Harper's Bazaar and had a summer share house in Long Island. As soon as I dove in the pool there, I realized that I dove into the shallow end instead of the deep end. My chin hit the bottom with such force that I shattered my C3 and C4 vertebrae. I was helicoptered to the hospital, and the doctors said I had less than a 20 percent chance of surviving not only that night but in general. After the surgery to stabilize my spine, which lasted almost an entire night, the prognosis was the same. By that time, my parents were there. My mother said to me, "Move something." So I twitched my shoulder. She looked at the surgeon and said, "You don't know my son."

One side effect of my injury was that I lost the ability to sweat, which means my skin can't release toxins. I developed acne and rosacea. It was oily but dry in some areas. It just looked like it was aging more quickly. I turned to my dad, a medical doctor trained in homeopathy, to help me. I'd tried everything— anything you could buy at CVS or Barneys, from creams and serums to prescription lotions and pills— and nothing worked. We went through 78 formulations until we found jasmine absolute, a mixture of botanical extracts and essential oils from the jasmine bloom, which is in all of our products. It helps to rebalance the skin naturally. It also has antibacterial properties. It made my skin look normal again, and I had felt anything but normal up until that point.

When did it turn into an actual business?

My ex-boss, Glenda Bailey, editor-in-chief of Harper's Bazaar, called me in to see how I was doing. She said, "Your skin might look better now than when you worked here." By chance, I had this ugly glass vial of what has become our signature product—the Smoothing Marine Cream—and gave it to her. I got a call three weeks later from the beauty director at Bazaar, who said, "OK, we're going to shoot this product in the March issue." I said, "But we're not sold in stores, we don't have a factory, and it's not packaged." She said they'd give me five months to find two reputable retailers and make it look good. So we launched at C.O. Bigelow in New York City and Fred Segal in L.A. We started to grow in the most organic, slow, and steady way.

Most new ventures fail. Why has yours prospered?

I met Martha Stewart when we won her American Made Award in 2014. She said sometimes it's better to take things slowly and learn from your mistakes and not be a flash in the pan. I think the concept of time gets lost in the shuffle when new businesses are starting. They say they want to be at $100 million in two years. It didn't really matter to me if we were there in two years or 10 years. My life had just changed in the blink of an eye in the bottom of a pool, so my perspective had shifted. I wasn't afraid to move slowly. In doing so, I was willing to take risks because we were starting small.

What was one of those risks?

The first time I went on QVC three years ago, they gave me 15 minutes of airtime. We had to make our Smoothing Marine Cream and Cellular Lifting Serum for them. If we didn't sell it, that meant we had to pay for all this product that was just sitting there. We sold out in seven and a half minutes. It doesn't happen often that a brand sells out on their channel. I have to say, I started crying. That was a big risk for us. But it's really propelled our business to the next level. It's impossible for me to visit every store we're in because of my physical disability. QVC gives me the ability to speak directly to our customers and show them how they're going to look better when they buy the product. That message goes to 44 million viewers. The opportunity we got from them was such a seal of approval.

What's been the biggest lesson you've learned along the way?

It's always important to understand when a mistake has been made and how to correct it. At first, our cleansers were in pump containers. They turned out to be incredibly annoying for our customers. Sometimes you're thinking more about how packaging will look instead of about actual day-to-day use. So we moved it into a tube that turned out to be better ecologically because it's made from recycled material. The customers really appreciated that we changed it because of their concerns. They saw that we listen and their voices matter to us.