America's food waste problem is bigger than you think

Imagine the 92,542-seat Rose Bowl stadium as a giant serving bowl. Now imagine it filled to the brim with food—tomatoes, pork chops, milk, all kinds of edibles. Finally, imagine all that food being trucked straight to a landfill. This is one way to visualize how much food is wasted in the United States every day, says Roni Neff, program director at the Bloomberg School of Public Health's Center for a Livable Future and an assistant professor in the Department of Environmental Health Sciences. As much as 31 percent of our post-harvest food supply gets tossed instead of eaten, the U.S. Department of Agriculture estimates. "The numbers are just so staggering," says Neff, who studies how and why people waste food. (Staggering and cruel: Hunger charities report that one in six Americans struggles to get enough to eat; the USDA reported that 14.3 percent of households in 2013 did not have sufficient food.) 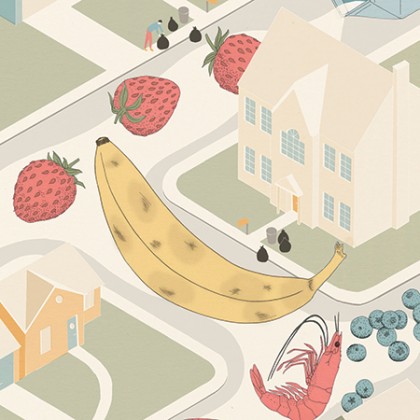 Neff led a study recently published in the journal PLOS One that included a first-of-its-kind survey of more than 1,000 Americans about their awareness of food waste and their attitudes and behaviors regarding it. Over 60 percent of those surveyed said they were "very" or "fairly" knowledgeable about the issue of food waste, and over half said it bothered them "a lot" to throw out food. Neff sees this as encouraging, indicative that consumers would be receptive to interventions to reduce waste. "The United States might be on the cusp of having a real opportunity to move forward in addressing the issue," she says.

But while they were aware that wasted food is a problem, those surveyed tended to blame others. Nearly three-quarters said they wasted less food than the average American, and 13 percent claimed they didn't waste any food at all. "Tossing food that spoiled in the refrigerator has become habitual behavior so that people don't necessarily see that as waste, because once something has spoiled it's not seen as food anymore," Neff says, offering one explanation for the underreporting.

Worry over food poisoning was the most popular reason for discarding food, leading Neff to conclude that consumers could use additional guidance to explain factors beyond age that can make food unsafe to eat, such as contamination and improper storage. One policy change she suggests: Encode the sell-by dates on perishable food labels so that only grocers can read them. "In the survey, a fifth of the people said they threw out food—especially milk-based food—on the sell-by date, which we know has nothing to do with whether that milk is safe to drink," she says. Sell-by dates are merely the manufacturer's estimate of peak freshness, not deadlines for safe consumption. A desire to "eat only the freshest food" was the number two reason respondents gave for wasting food. One reason for this, Neff thinks, is a foodie culture fostered by celebrity chefs and cooking programs that has convinced many to seek only perfect, unblemished food.

What motivates people the most to reduce food waste? Those surveyed said saving money, by a large margin. Reducing the environmental impact was least motivating. But those costs, too, can be staggering. Various estimates note that about one-third of fresh water, cropland, and fertilizer goes to growing food that ultimately will be wasted. "We do have to work to remind people the amount of money that's being thrown out along with the food," Neff says. "But at the same time, I'd like to see us build up our education efforts about these vast environmental impacts