When hospital personnel in U.S. operating rooms rip open shrink-wrapped packages of supplies for each procedure, they usually throw away anything unused. Surgeon Richard Redett, director of the Johns Hopkins Cleft Lip and Palate Center, believes discarded surgical supplies could do much to improve quality of care in developing countries. 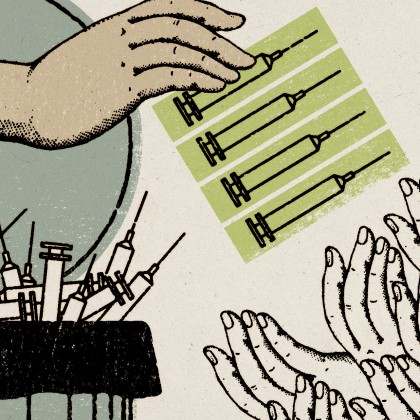 Since 2003, Redett has been the medical director of SHARE—Supporting Hospitals Abroad with Resources and Equipment. The medical student–run organization started in 1991 to recover clean, unused medical supplies at Johns Hopkins Hospital and donate them to resource-poor hospitals in developing countries. They follow World Health Organization guidelines, including sending only essential and requested supplies to prevent new waste.

When Redett became involved with SHARE in 2003, the organization, which he emphasizes is "99 percent run by medical students," had between one and three volunteers taking donated surgical supplies to West African medical clinics each year. Since 2008, SHARE has sent more shipments—currently about 10,000 pounds per annum—with more volunteers each year. In West Africa, an intermediary pays to ship the supplies to various hospitals.

"I do a lot of international work and saw an opportunity to recruit more students," explains Redett. "I knew there were many supplies we weren't capturing because we were limited in volunteers. I had an interest in international health, and it seemed like a good opportunity to increase our impact." SHARE works with others planning trips abroad, too. "If somebody contacts us and says they're doing a hospital trip and need supplies, we'll help them as well," he says.

For a study published by World Journal of Surgery in November, SHARE wanted to determine the potential for U.S. hospitals to donate supplies to resource-poor hospitals abroad. Redett and co-researchers found that one year of donated urinary catheters, needleless disposable syringes, sutures, gauze, and other items included in operating room packs could significantly decrease disability-adjusted life years for individuals. (DALY is a term used to describe years of life affected by illness; decreasing DALY means more days of good health.) In the study, Redett and others figured out a list of the 19 or 20 most commonly used supplies and tracked them in two hospitals in Ecuador from September 2010 to November 2013. They found that a year's worth of those donated supplies could prevent 5.5 percent of the total 192,000 DALY lost owing to leprosy worldwide, for instance.

American hospitals accumulate thousands of pounds of open but unused supplies each year, which in most cases would be discarded, says Redett. "Our intention in noting this is to say, 'Hey, if you have this much waste coming out of your hospital, let's put it to good use.' If you extrapolate our data to other hospitals, the impact is significant." Others are listening. "For three to four years, I and the students have been trying to get other hospitals interested in SHARE. But the amount of attention this study has generated has been stunning to me," he says. In the late weeks of October, for example, five or six medical schools called SHARE to ask for input on how to start a similar program.

If more U.S. medical centers got involved, the improvement in global health would be huge, Redett believes. "Ideally there'd be no waste in the first place, but, in 2014, unfortunately, there is. Donating to hospitals in developing countries is simple, cheap, and effective if you follow the WHO guidelines for sending supplies to developing countries." He adds, "Developing countries have very good surgeons and nurses, but they're lacking supplies. Hospitals aren't stocked with what they need. Because of donated supplies, surgeries that previously could not be performed are being performed."