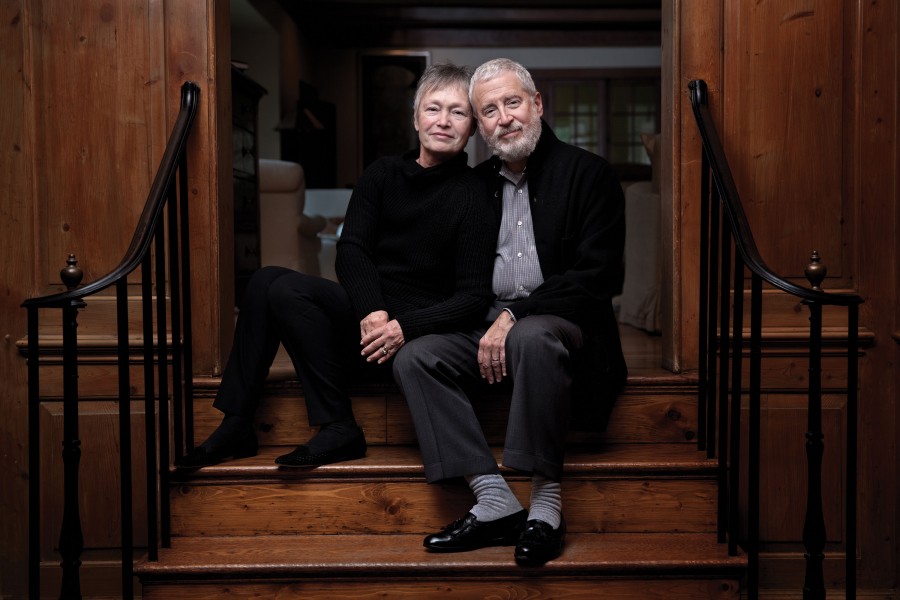 Imagine you are pregnant. For nine months you have felt a child grow inside of you, until you arise in the middle of a bitter cold January night to travel across Chicago to the hospital. You are so excited you can hardly contain yourself.

But when you arrive, the nurses and intern tell you that the baby has no heartbeat. There must be some mistake. How can nine months of life be reversed so quickly? You are on the delivery table, and you start negotiating with God. You are pushing and breathing. You give birth to a stillborn child.

The child's name was Cameron, and every year his father, Jason Kravitt, A&S '69, tells this story to a classroom of second-year Johns Hopkins pediatric medical residents.

"Back then [in 1982], nobody on the medical staff wanted to be with you when your child died," Kravitt explains. His wife, Beverly, held Cameron for only a few moments before the medical staff took him away. "They essentially ran away and left us alone. They never brought him back for us to look at. We never saw him again."

The hospital then assigned Beverly to the maternity ward, "surrounded by nothing but mothers and babies," until Jason asked that she be moved. That's when the situation "went from idiocy to madness," says Jason, as the hospital then placed Beverly in the cancer ward, surrounded by death instead of new life, with nurses who weren't trained for postpartum care. Jason ended up hiring a private nurse to care for her in the hospital.

Appalled at the treatment they'd received, the Kravitts approached the hospital with suggestions for improving patient care—but their advice fell on deaf ears.

Frustrated and grieving, Beverly Kravitt refused to give in to self-pity. Instead, she was determined to help other bereaved families any way she could. Walking along the beach with her husband several months after their ordeal, she sketched out a plan: raise enough money, and their voices would be heard. In 1985, the couple founded the Cameron Kravitt Foundation.

The foundation initially funded programs for parents exclusively in the Chicago area, until Kravitt began speaking with a development officer at Johns Hopkins about his new foundation. "They had an idea to add a program to train doctors at Hopkins. We felt this was something that would attack the problem head-on as opposed to just nibbling at the edges," he says.

Launched in 1996, the Cameron Kravitt Foundation Death and Bereavement Seminar has trained 442 Johns Hopkins pediatric residents and 24 chaplains-in-training. Jason attends each session—sometimes with Beverly, too—to share his story with residents as they begin a daylong seminar on death, dying, and compassionate care.

Over the course of the day, the physicians meet other parents who have lost children, learn techniques to work with grieving families, then practice their new skills with actors standing in as hospital patients. They also learn about autopsy and organ donation, the role of ministry for grieving families, and the importance of dealing with their own stress and burnout.

According to Marisa Kristeen Matthys, a Johns Hopkins resident and aspiring pediatric hospitalist who took the seminar in January, a high point of the training was working with the patient actors. "Every second of the simulations felt real. You were with a family delivering difficult news, and you felt their pain and shared their tears," says Matthys, who recalls how "enlightening" it was to learn "the positive role we can play in a family's experience with death and dying."

Matthys isn't the only one who has wept during the training, notes Kravitt. "We've had many residents run out crying." But he says that's a small price to pay in order to ensure that others receive a level of compassion from doctors he wishes he had received.

Kravitt, a New York–based partner at the international law firm of Mayer Brown, admits that it's easy to become cynical about health care in the United States. But every year when he meets the new batch of second-year residents, his faith in the future of medicine is restored. It's the compassion of those students— and the support of their two children, Nikola, 36, and Taylor, 31—that keep Jason and Beverly committed and enthusiastic to raise money for the next year's class.

It's not cheap. The one-day symposium costs about $25,000 to run, and the foundation has kept it going for nearly 20 years.

"It's a 'bicycle charity.' It doesn't have an endowment, so you have to start pedaling when you run out of money," Kravitt says. "We raise money through the foundation, and we usually have a fundraiser every other year." At the next fundraiser, the Kravitts hope to raise $500,000 to endow the program.

Kravitt believes that by holding the program at Johns Hopkins, training new residents year after year who will go on to teach and practice at some of the best hospitals around the world, he and Beverly are helping to make wide-sweeping change. "Imagine the influence we will have eventually as the generations add up," he says. "The influence we have on the medical industry as a whole is maximized by being at Hopkins."