Jamie Flerlage remembers her first— it was green. Branden Engorn's was pink. Janet Serwint says the turquoise one is on her shelf, but she probably had an earlier edition first. Chances are every doctor and health care professional who cares for children can recall the color of the first edition of The Harriet Lane Handbook they used when training. And for years, the handbook's cover featured the same image: a small illustration of the Johns Hopkins Hospital dome set inside a solid color. 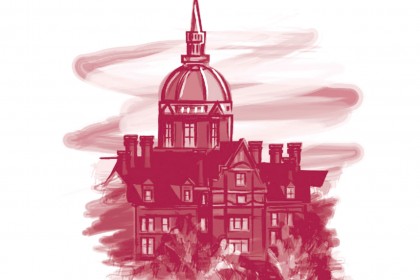 Since it was first created in 1953 by six Johns Hopkins pediatric residents who wanted a pocket-sized guide of essential information, The Harriet Lane Handbook has become the bible for up-to-date pediatric care information. It is updated every three years by Johns Hopkins pediatric residents and has been translated into 20 languages. The new 20th edition is available as a 1,132-page book, online, or via an app.

"You would never meet a pediatric trainee or pediatrician who didn't use 'the Lane,' as we call it, at some point in their careers," says Engorn, one of the two co-editors of the 20th edition that came out in July. The book is named after the Harriet Lane Home for Invalid Children, a now defunct Johns Hopkins children's hospital that opened in 1912. "As an intern it was in your coat pocket on your hip," says Flerlage, the other co-editor. She notes that everyone adds tabs to frequently used pages, especially the drug formulary in the back that covers dosages for more than 400 medications. "And you put your name on that spine in marker because everybody has one."

The triennial update process begins the first year of a pediatric intern's three-year residency. Future chief residents are selected during that initial year, and if your class coincides with a Lane update year, as chief resident you oversee the endeavor. Engorn and Flerlage were tapped at the end of their 2009–10 first year to be co–chief residents during the 2013–14 rotation. During the second year of their residency, Engorn and Flerlage asked the new first-year interns which of the Lane's 31 section chapters they would like to research, update, and write. Each first-year then asked a faculty adviser to assist them. In all, 33 residents, three pharmacists, one nutritionist, and 41 faculty members looked at the information in the previous edition, determining what needed to be updated and why. Then the residents began writing, with Engorn and Flerlage overseeing the enterprise.

Sometimes the updates are significant. The chapter on behavior and development was put on hold until the American Psychiatric Association published its new diagnostic guidelines in the 2013 edition of the Diagnostic and Statistical Manual of Mental Disorders, Fifth Edition (DSM-5) before that chapter could be updated. "The whole purpose of the book is that it's written by residents. They're the frontline providers," Engorn says. "We needed to really revamp that whole [behavior and development] chapter to make sure the diagnosis of autism was the diagnosis of autism that the new DSM-5 said, not the DSM-4."

Other updates are more informed by clinical needs. In the chapter on procedures, which covers everything from taking a blood sample and placing an intravenous line to taking a lumbar puncture or inserting a catheter, writer Bradley McCammack wanted the online and app version of the Lane to link to a series of instructional videos created by the New England Journal of Medicine to provide more detailed procedural instructions. Engorn and Flerlage worked with the Journal to make that content available to the Lane's users. "We might not be writing a new protocol or saying what the new drug is in every instance," Engorn says, "but [the residents] find a way to present it in a different way so the book can be more useful to the readers."

The co-editors finished their chief residencies a few weeks after their edition of the Lane was published. Engorn is currently receiving advanced training in anesthesia and critical care at Johns Hopkins, and Flerlage is working on a hematology-oncology fellowship at St. Jude Children's Research Hospital in Memphis, Tennessee. Both mention what an honor it was to work on a trusted resource with such an esteemed tradition. Producing a Lane update "really demonstrates the emphasis we put in the program on leadership," says Serwint, a Johns Hopkins Children's Center professor and director of the pediatric residency program. "It allows [residents] to excel in scholarship and be on the cutting edge of new information and the dissemination of clinical practice and guidelines. I think it also instills in them the respect and need for lifelong learning."

Flerlage appreciated the reach of the Lane firsthand. She started her St. Jude's fellowship during her gap year, and her interests in international oncology had her spending part of that time working in Guatemala, where she saw both English and Spanish versions of the handbook. "Everybody there has them," she says. "No matter where you go, there's a Lane on the desk. Seeing the universality of the tradition is rewarding."

In 2012, Johns Hopkins Pediatrics moved into its new home inside the Charlotte R. Bloomberg Children's Center, and to honor the occasion Engorn and Flerlage felt the Lane needed to update its cover. So the 20th edition features a photo of this shiny new building where the next generations of Johns Hopkins pediatrics residents will care for kids. "When you ask previous editors what people know most about your book, it's actually the cover," Engorn says. "We thought that it was only appropriate that we change the cover in the new edition for the next century of pediatric care at Hopkins. And that was pretty cool to think about."