Right where they left off

It wasn't easy being an African-American man in Baltimore in the 1950s, when segregation was the law and racism was rampant. But for Elmo Douglass, Engr '54, Johns Hopkins was a haven. Although he was one of the first black graduates  of the university, Douglass says he never encountered racism on campus. "I suspect those that didn't like my being there stayed away, so I didn't know who they were," he says. "But then there were those who befriended me, like Lou." 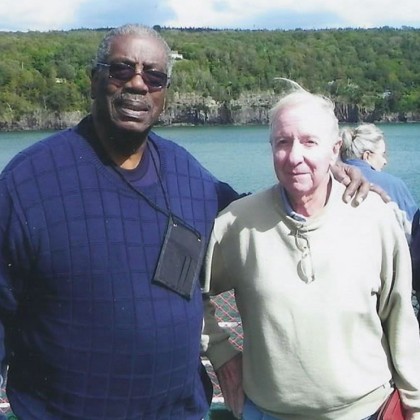 Lou Robinson, Engr '54, was one of Douglass' classmates in the Department of Civil Engineering. Robinson, Douglass, and a few other students moved as a group through their course work—physics, mathematics, chemistry, mechanics—and often commuted to campus together, by bus or in Robinson's father's car. "Elmo, through force of his personality, became integrated at Hopkins," Robinson says. "After the first couple weeks, he was accepted like everyone else."

The young men bonded over the difficulty of their course work. "Hopkins was not an easy school, not at all," says Robinson. "I recall when we first entered, during the orientation we were told that half of us would not be there at graduation, and that's the way it turned out." But Douglass says it wasn't all a grind. "We managed to find a few times to do bad things," he says conspiratorially. "In those days, a group of us would pick up a Volkswagen and move it so our friend couldn't find it." And there was an incident when someone—"I don't want to accuse Lou," Douglass says— replaced copper sulfate with blue ink in the lab, rendering an experiment useless. ("It wasn't me!" says Lou.)

After graduation, the two followed similar paths. Both spent several years in the Army Corps of Engineers and went into highway engineering, Robinson in Pennsylvania and Douglass in California. Both married and had children—two sons for Douglass and one for Robinson.

But they didn't keep in close contact until the 2004 Johns Hopkins reunion, when they both attended a cookout  at a former classmate's home on Wye Island. "We picked up where  we left off 50 years before," says Robinson. The two discovered shared interests in literature, music, current events, and especially travel. Together they've journeyed to Brazil, New England, Canada, the Serengeti and the Ngorongoro Crater in Africa, and down the Mississippi on a riverboat. These adventures keep their friendship lively, as does a snappy sense of humor.

With both of their wives and many of their classmates deceased, the two are grateful for each other. "I don't think there's any chance that we won't continue to communicate on a regular basis," Douglass says, "and I think we'll always be friends."