On the roof of JHU's Ames Hall, bats and owls vie for space 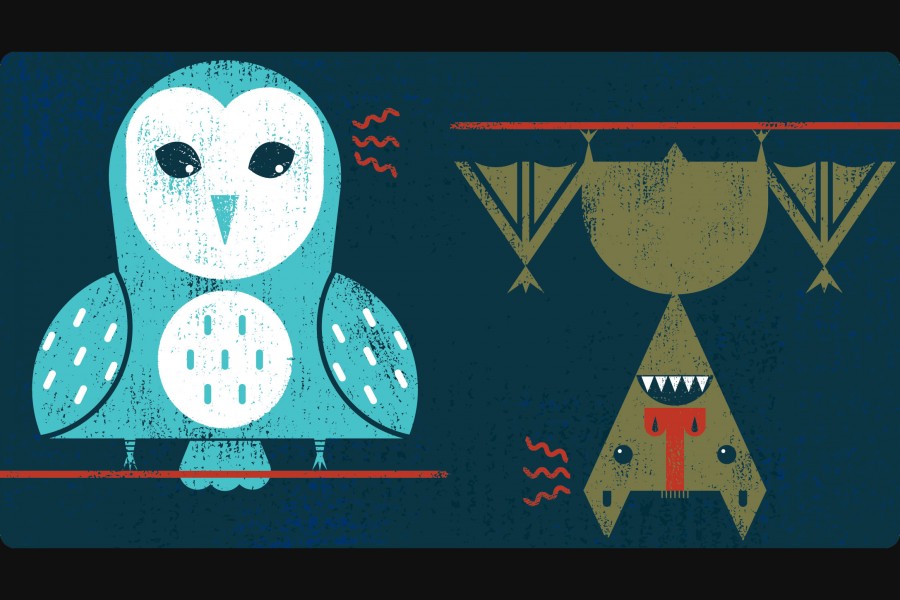 Here's a problem likely not faced by Johns Hopkins researchers before:  On the rooftop of a campus building, how far apart should they site one cage holding big brown bats and another cage full of barn owls? That's what Cynthia Moss, a professor who studies echolocation in bats, and Assistant Professor Shreesh Mysore, who uses barn owls to research the inner workings of the brain, must figure out. Both Krieger School researchers want to establish roosts on the roof of Ames Hall—an outdoor location they hope will make the animals comfortable enough to breed.

The problem is, as Mysore succinctly puts it, "barn owls eat bats."

Mysore's and Moss' labs are adjacent to one another in the basement of Ames. Their test subjects—14 barn owls and approximately 70 bats from four different species—flutter about separately in several climate-controlled rooms, perching on faux tree branches, or, in the case of the bats, dangling from the mesh-covered air ducts in the ceiling.

The potential predator-prey conflict between their animals notwithstanding, both scientists, who work in the Department of Psychological and Brain Sciences, pursue similar goals: to understand the neural processes these animals employ to navigate. Each focuses on animals' midbrains, an area responsible for deciding what to attend to in spatial attention.

In her bat lab, a 20-by-20-foot soundproofed room that looks more like a recording studio than a laboratory, Moss films the bats in flight with high-speed cameras. She uses sensitive audio equipment to record the high-frequency calls they make as they bounce sound off objects and use the feedback to adjust their flight paths. Each sequence plays out in less than a second, but by slowing down and correlating video of a bat's flight with changes in its vocalizations and neural activity (measured via electrodes planted in the animal's midbrain), researchers can decipher how bats make decisions during flight. "Essentially, we're figuring out what's going on in the bat's mind," says Moss, whose research also focuses on bats' senses of vision and touch. "We're very interested in trying to understand how bats build pictures of the world. Of course, we can't ask a bat directly, 'What do you see?' But we can use their behavior to make inferences about what they experience."

Mysore also studies decision-making processes, specifically, how the brain decides where to direct its attention. Barn owls, with their acute senses of sight and hearing, are specialists across two sensory modalities. They also happen to have midbrains with neatly arranged neural clusters that are easily measured and manipulated. In his own soundproofed lab, Mysore straps little owl earphones onto his subjects and pipes in sequences of noises. He uses a projector to present the birds with a series of abstract, dotlike images meant to provoke responses of varying intensities. By measuring neural activity in the birds' midbrains, he can decipher which sensory input—the sights or the sounds—the animal attends to with the most immediacy. Mysore then uses electrical current to stimulate areas of the forebrain, "hijacking" the bird's neural circuitry to con the animal into thinking it wants to pay attention to something. He then plays the sounds and/or images again, taking measurements in the midbrain to discover where the animal's attention is directed. If the external stimuli are strong enough—say, a series of big, scary dots coming right at the bird— it trumps any manipulation he's done artificially. Mysore can see how the competition for attention plays out in the neural circuits of the brain.

More recently, Mysore has been experimenting with mice to learn more about what goes wrong in the neural pathways of people with attention-related disorders such as ADHD and schizophrenia. "The owls have been invaluable in helping us make what we think are big leaps in our understanding, but we want to test to see if this is going on similarly in mammals," he says. "We can make very strong hypotheses about how the brain may work under normal circumstances, and therefore, make hypotheses about what may be going wrong in various psychiatric illnesses."

Mysore and Moss recognize the common thread in their research and hope to collaborate. "Historically, there have been a lot of connections between research involving owls and bats as auditory predators," says Moss. "We're both very interested in spatial attention, and we use different animal models for studying these mechanisms, so there could be some very interesting comparisons."

As far as the rooftop of Ames Hall is concerned, the university has hired an architectural firm to reimagine the space. Whatever the final design, one thing's for certain: The cages holding the owls and bats will be as far away from one another as possible.