We were almost upside-down, flying toward the ground at 480 knots. I knew what was coming next and didn't relish it. Sure enough, the world outside the canopy spun around in a couple of heartbeats, and now we were rightside-up—still diving earthward. At the bottom of the dive, the pilot released a small bomb, then pitched the nose up hard. G-forces, seven times normal, squeezed me until he took us hard left and down to 500 feet, flying from the target as fast as possible to escape would-be pursuers. It was then I realized I didn't feel very good. 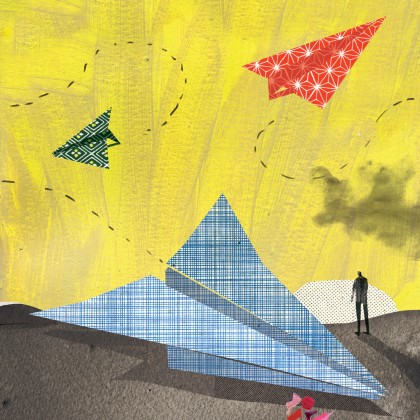 On this day in 1989 the United States was at peace. Our bomb was a practice bomb. I was in the back seat of an F-4D Phantom jet, roaring over a bombing range in North Carolina, serving not as a warrior but as a military flight surgeon in the District of Columbia Air National Guard. I was backseat in the Phantom so I could understand the mental and physical stresses our pilots and backseaters experienced in the air before I ruled on their medical fitness to fly. It was a part-time job. A dream assignment.

Just minutes earlier, while speeding above the forest at nearly treetop level, I felt exhilarated. But that was now replaced by commanding nausea. My brain, evolved from tree-dwelling ancestors, was unadapted to the gyrating flight path we'd taken in four bomb runs.

There were two more runs to go. Resistance was futile. I pulled a small white plastic bag from a flight suit pocket, switched off the microphone in my oxygen mask before unbuckling the mask, held the bag to my face, vomited, wiped, reattached my mask, activated the mic, and stowed the bag. Relief ... temporarily. We started the next run.

And so it went every time I flew a ground attack mission. For safety reasons, the Air Force prohibits anti-motion-sickness medications, and switching to 100 percent oxygen did not help me as it does others. There was one sure cure: If the pilot gave me the stick, I instantly felt better—a curiosity long known to aviators—but that was not an option during attack runs.

My situation was hardly unique. Most of the backseaters in our squadron told me they would become nauseated if they flew infrequently. They advised flying daily for two weeks and twice weekly thereafter—a stark impossibility for a full-time cardiology fellow at Hopkins.

And so ended my fighter dreams, as I chose the cardiology ticket over the fighter ticket. Yes, the fellowship ultimately opened many doors, but none was as fun as the one it closed.