A few minutes before the end of the 2014 Johns Hopkins University Dance Marathon, students decked out in glow-stick necklaces, tutus, and shirts emblazoned with "I <3 DM" lined up to face the crowd. One by one, each held up a large number to the audience of several hundred students in Homewood's Glass Pavilion, revealing the amount that had been raised for the Johns Hopkins Children's Center: $32,559.54. With a contribution from university President Ron Daniels, the grand total came to $35,000—a 279 percent increase from the previous year. 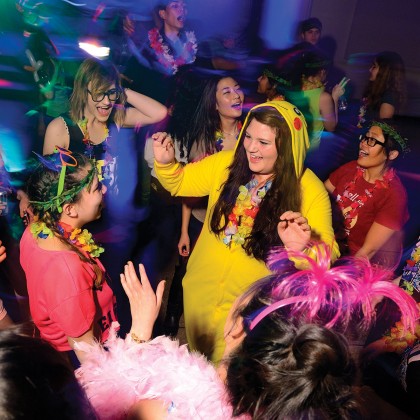 Participants solicit sponsorships from family and friends to directly support the hospital. But financial support for the dance marathon itself— to pay for audio-visual equipment, a black light, and a photo booth—comes from the Student Grants Program of the Alumni Association. Every fall, the Alumni Association invites Johns Hopkins students to apply for grants of up to $1,500 to support community service events and initiatives. Those grants have gone to everything from the university's student chapter of Engineers Without Borders' potable water project in Guatemala to Cooking 4 Love, a group that prepares and serves meals every Friday at My Sister's Place women's shelter. Cooking 4 Love President Misa Baum says the student grant funding helped defray the cost of food, equipment, and transportation. "Last year, without the alumni grant money, our meal budget each week would have been $100. The alumni grant money allowed us to add $20 to each [week's] meal, which helped us add healthy salads and fresh fruit for dessert. It also allowed us to make long-term investments like buying sharp knives." "There are so many groups that are looking for funding, and it's great to have that money in the budget to do the things you want to do," says Alex Surget '16, co-president of the Dance Marathon executive board.

Of the 80 applications received for the 2013–14 cycle, 49 were funded for a total cost of $50,000. Student Grants Program committee chair Steve Lascher, SPH '96, '08 (PhD), hopes the amount for the 2014–15 cycle will be closer to $62,500. "I would love to see our budget reach a quarter of a million dollars over the next five years. We don't give out enough money," he says. The funds come from a combination of university support and donor contributions to the Alumni Association. Those who want to directly support student projects can designate their gifts to the Alumni Association as such. Alumni Association President Jay Lenrow, A&S '73, and his wife, Ruth, have personally pledged $25,000 to be given over the next five years to enhance the Student Grants Program. While the program cultivates the next generation of alumni donors, its chief asset, Lascher says, is immediacy. "This committee has the greatest immediate impact on the students across all of the schools," he says. "It is a perfect opportunity to show how we allocate funds from the Alumni Association in support of the students."