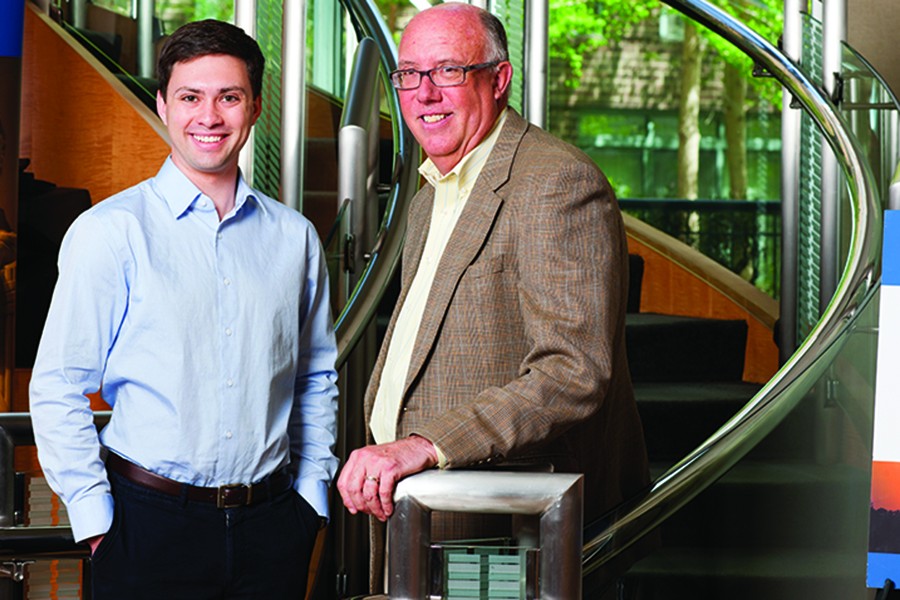 After three or four classes with Bruce Riedel, Yaniv Barzilai, SAIS '13, arranged to meet with the professor during office hours to divulge what he'd been working on.

"Yaniv told me he'd written a book, which was the first and only time one of my students told me they'd written a book," says Riedel, who was teaching a course on regional security issues in South Asia. "The first time I read it, I thought, 'This is a fantastic book. It's not just a good book, it's a really, really good book on a really important question.'"

Riedel agreed to write the foreword of Barzilai's 102 Days of War, which takes a critical look at the early days of the U.S. war in Afghanistan, interviewing key decision-makers and extracting hard-won lessons from the early days of America's longest war.

Although he and Riedel regularly exchange emails, they are both frequently on the move. He recently spoke to his former professor via Skype from his post in Baku, Azerbaijan, where he's practicing his Azerbaijani and indulging his love of doner kebab. A few days before Barzilai heads back to the U.S., Riedel will be on a plane bound for South Asia, this time for a vacation on a cruise ship leaving from Singapore. From opposite sides of the world, the pair discussed the early events following the September 2001 attacks and the decisions made in the heat of that moment—about who the enemy was and how to combat them—which continue to shape the world we live in.

Bruce There's much to be learned about decision-making and the requirement that a decision-maker clearly states what the mission's objective is before he sends young American men and women to engage in combat operations or dangerous intelligence operations for the country.

Yaniv Exactly. Defining your objectives is critically important—defining them clearly and precisely. That was a major failure in 2001. The administration never really came to a consensus about what they were trying to achieve, and what each person understood was different. The president understood the objective to be to remove Afghanistan as a safe haven for al-Qaida. The top three officials at the Defense Department understood their objective to be to prevent future acts of terrorism against the United States. Completely different objectives, and ultimately neither one was the correct objective for the matter at hand.

B To be fair to the Bush administration, it was an extraordinary period. The U.S. had never been attacked— and we hoped we never would be attacked—the way we were on September 11. The country as a whole was in a state of trauma. I've likened it to a collective nervous breakdown, and that included the senior leadership of the U.S., up to and including the president to a certain extent, but that's no excuse. The reason you get the job—the reason you're elected—is that you're supposed to be able to maintain clarity of thought, even in the most dangerous moments.

Y There was a stunning moment for me when I was interviewing Doug Feith, the undersecretary of defense for policy from 2001 to 2005. He said to me, "If you think that 9/11 led inevitably to our military action in Afghanistan, then you aren't doing justice to the administration's strategic deliberations."

And I just sat there dumbfounded when he said that. Because the notion that 9/11 did not lead inevitably to what we were doing in Afghanistan signified the vast misunderstanding that he had, and that other leaders in the Defense Department had, about what was at stake, who attacked us, and the path forward. In that sense, you can understand how they started maneuvering toward Iraq, because the definition of the threat was so vague, and so inaccurate, that any*thing could be involved.

B The urgent necessity in the winter of 2001 was to focus on "who is the enemy and how do we ensure that we eliminate this enemy, not only before they can carry out another 9/11, but before they can become a long-term threat to our interests." But the job was botched because there was a lack of rigorous clarity in the thinking about who the enemy was and how we go after them. And the story's not over. We're arguably well into the second decade of the war against al-Qaida. It's a message that has continued importance and relevance.

Y There's a real question about whether al-Qaida could have survived if almost everybody in Tora Bora had been killed or captured. There will never be an opportunity like what happened at Tora Bora, where most of al-Qaida's leadership was in one 6-square-mile area. If anything, al-Qaida continues to spread farther and farther: to Yemen, Somalia, the Middle East, North Africa, Syria, and beyond. There's no way for us to know what al-Qaida would look like today—what the world would look like today—except to say that historians will be able to debate whether al-Qaida could have survived. And we would be in a fundamentally different world.