To sleep, perchance to text

The packages started arriving without warning. A camera, new clothes, a software program. One of Rachel Salas' patients thought they were a joke or a prank from a friend—until she noticed that the payment information had been filled out with her credit card number. Finally she realized the truth: She had bought them herself—in her sleep. 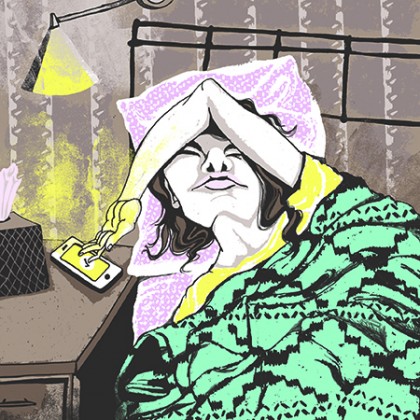 Such cases are becoming more common for Salas, an assistant professor of neurology at the School of Medicine and a doctor at Johns Hopkins' Sleep Disorders Center. Forget sleepwalking. Today's somnambulant adventurers go for activities with a more 21st-century bent, such as placing online orders while still asleep. Considering how many people are tethered to their phones all day and then go to bed with them on the nightstand, perhaps it was only a matter of time before they started continuing that relationship with the device while sleeping.

In addition to sleep shopping, some of Salas' patients indulge in a very modern form of talking in their sleep: sleep texting. One of them carried on a whole conversation in her sleep about a recent trip she had taken to New York with a friend—which was confusing to the friend, since she had never been there. "It's almost equivalent to drunk texting," says Salas. "People wake up embarrassed the next day, but so far none of my patients have reported that it has really got them into trouble."

Salas first started noticing the phenomenon two years ago. Usually patients would come into the clinic for other symptoms, such as sleepwalking, and then report nocturnal cyber activities as well. Such activities fall under the umbrella of parasomnias— behaviors that some people engage in when their thinking brain is shut off but the rest of their brain remains active. Some of Salas' patients purchased items they had looked at or left in online shopping carts while awake. "If you are on the fence about whether to purchase something, it's a lot easier when you are asleep and your inhibitions are turned off," she says.

Carlos Schenck, A&S '72, a professor of psychiatry at the University of Minnesota and author of Sleep: A Groundbreaking Guide to the Mysteries, the Problems, and the Solutions (Avery 2007), says, "Nowadays there are a lot of scientists doing sophisticated studies that show that sleep is not a whole-brain activity. The frontal cortex is shut down, but the other parts of the brain can engage in complex motor activities. Because of that, we don't have the judgment [which is controlled by the frontal cortex] to say it's not appropriate to send a text in the middle of the night."

As in Salas' cases, most of the incidents Schenck has treated are relatively benign, such as the woman who invited all her friends over for happy hour at 5 p.m. the next day, only to be confused when they showed up on her doorstep. But sleep texting can create problems and even have legal ramifications. "There are people who send sexually explicit messages to people they are not intimate with— it can lead to all kinds of relationship issues," says Schenck.

These parasomnias usually occur not during REM sleep when sleepers are more likely to dream but during the deepest part of sleep: delta, or slow-wave, sleep. They seem to be triggered when the body is run down from sickness or lack of sleep, or from TV watching or alcohol use before bed, which results in a more restless slumber. They can also be a sign of other problems, such as sleep apnea, that cause patients to wake up more in the night.

Often treatment means addressing the underlying issues that prevent a good night's sleep. As a last resort, Schenck uses medicines as well, sometimes prescribing clonazepam, a drug in the same family as Valium and Xanax.

Over-the-counter sleep aids can sometimes worsen the problem. "Ambien is a notorious culprit for triggering nighttime arousals," says Schenck. "It makes people extremely disinhibited." Both doctors recommend that patients suffering from parasomnias take preventive measures—deleting saved passwords from browsers, emptying online shopping carts, and most importantly, removing electronics from the bedroom. "We encourage people to unplug all electronics an hour before bedtime," Salas says, and adds one more piece of advice—put the cellphone in a drawer.