On a rain-slopped Monday afternoon, Dan Merzel, Engr '09, sat alone in a hotel room in New Britain, Connecticut, with the tools of his trade: a black umpire duffle bag containing his pads, mask, and uniform, a suitcase, and a small cooler. The 26-year-old was set to officiate a game that evening between the New Britain Rock Cats and the Harrisburg Senators, minor league baseball teams in the double-A Eastern League. That matchup would be rained out, but Merzel and his crew worked games the next two nights before climbing into a league-owned minivan to drive through the night to Richmond, Virginia, for a series there. So goes Merzel's life for the next six months. 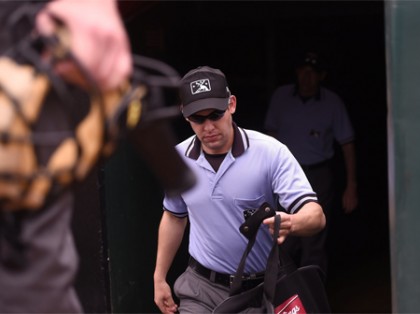 Four years into his professional baseball umpire career, Merzel has embraced this vagabond existence in pursuit of a boyhood dream. "I've had a thing for officiating since I was 12. I can't tell you exactly why, but it's just always been an interest and a passion," he says. Perhaps it is in his blood—Merzel's father umpires NCAA college baseball. "After I got my degree, I had some job offers, but I didn't want a desk job and I knew if I didn't pursue umpiring I would regret it years from now."

For Merzel, baseball and sports have been an all-consuming interest. He grew up in Hopkinton, Massachusetts, site of the Boston Marathon starting line, where he played hockey and baseball in high school. His hardball career continued as an outfielder at Johns Hopkins. In his junior year, the Jays went all the way to the championship game of the D-III College World Series; Merzel batted .341 and was named most valuable player in the Centennial Conference tournament.

The winter after he graduated, he attended the Jim Evans Academy of Professional Umpiring in Kissimmee, Florida, then spent the following summer umpiring in a collegiate summer league in Virginia and an independent professional league on the East Coast that featured teams like the Lancaster Barnstormers and the Long Island Ducks. The experience earned him an invitation to attend an umpire evaluation course run by Minor League Baseball, which led to his first minor league assignment in the New York–Penn League, a short-season single-A league five steps down from the majors. He worked his first game in June 2011 in Aberdeen, Maryland, home of the IronBirds, in front of 6,724 fans. "I had butterflies," he says. "I just remember being really excited. Here it was opening day for this team, in one of the nicest ballparks in the league. The stands were packed. I remember telling myself, 'Trust your training.'"

Working in the New York–Penn League, he umpired 76 games in an 80-day span. Last year, he earned a promotion to double-A ball. He works in a three-man crew that rotates the on-field roles. One night Merzel umpires at first base; the next night he might be behind the plate. Off the field, his jobs are van packer and hotel scheduler, which means that before the season starts, he confirms 160 nights of rooms for himself and his crew. Another team member finds the best local restaurants.

When he's not on the road, Merzel lives in an apartment in Philadelphia. He returns when he can to visit friends and be with his longtime girlfriend. Managing a personal relationship given his schedule has not been easy. "Any job where you travel this much makes it challenging to make it work," he says. "My girlfriend, Rebecca, is extraordinarily understanding. She has learned a lot about baseball in the past couple of years." For a six-month double-A season, umpires earn between $2,300 and $2,700 per month. Merzel makes ends meet off-season by officiating youth and high school hockey in and around Philadelphia. He also tutors high school math and SAT/ACT prep, and since January has been a statistics instructor for online courses offered by the Center for Talented Youth. (He was an applied mathematics and statistics major at Johns Hopkins.)

Typically, umpires spend two to three years in double-A ball before they are considered for promotion to triple-A, which is one step from the top. But there are no guarantees of progress to the major leagues. Some years there are no openings for promotion to the big leagues, and if there is one, every triple-A umpire is in competition for it. Merzel says he tries not to look ahead. Do the best job you can do and everything else will fall into place, he says. "I have the best job—one that allows me to be on the baseball field every day. It's what I wanted to do my whole life."