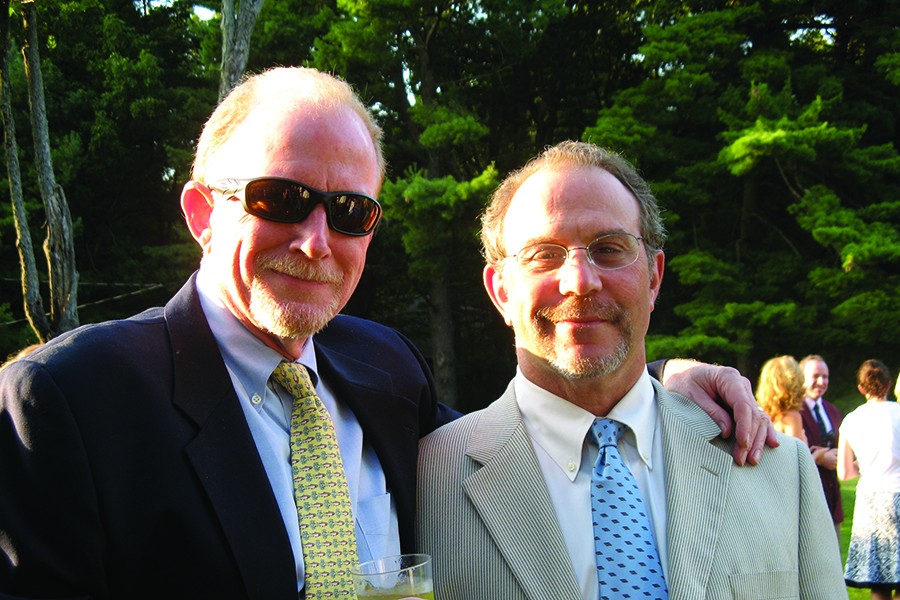 It's fair to say that neither John H. Morrison, A&S '74, Med '79 (PhD), nor Robert Barbera, Engr '74, '78 (PhD), was thrilled when he arrived at his freshman dorm room to meet his roommate. Both recruits for the Johns Hopkins lacrosse team, they had played for rival public high schools on Long Island. "I was very upset," says Barbera with his characteristically dry humor. "I was thinking my roommate might be from Indonesia or at least California, and in walks a guy who I'd been trying to kill for three years with a stick."

Despite that hiccup, the two became fast friends. Morrison didn't end up playing lacrosse due to a back injury (Barbera was named an All-American player, scoring a goal in the 1974 championship win against University of Maryland), but the duo had other things in common: an affinity for Janis Joplin and intramural flag football, to name two. "We both had big personalities," says Morrison. "If the people in Clark [Hall] remember me and Bobby, they probably remember us listening to music and partying and having a good time. I think when all is said and done, we've represented 102 Clark very well."

Indeed, Barbera and Morrison settled into academia, supporting each other through their undergraduate and graduate programs at Johns Hopkins—Morrison in neurobiology, Barbera in geography and environmental engineering with a concentration in resource economics. Afterward, Morrison spent nine years doing neuroscience research at the Salk Institute in San Diego. Barbera eventually moved with his family to Greenwich, Connecticut, and became one of the mostly highly ranked Wall Street economists.

When, at the age of 37, Morrison had the opportunity to launch the neurobiology program at Mount Sinai Hospital in New York, he and his family returned to the East Coast—a few miles away from the Barberas. The families spent many hours together; Barbera's three sons and Morrison's son (Alex, A&S '11) and daughter grew up together and remain close.

These days, Barbera splits his time between Pennsylvania and Baltimore, where he directs and teaches in the Center for Financial Economics at Johns Hopkins. Morrison remains in New York at Mount Sinai, where his positions include dean of Basic Sciences and the Graduate School of Biomedical Sciences and professor in the Department of Neuroscience. But at their family cabins in the Poconos, the friends still while away many hours fishing, grilling, and talking, as they have for 45 years, about the stuff of life: career, health, friends, and family.

"Our conversations have always been at the deepest level—not superficial," says Morrison. "But we've had enormous great times. Ninety percent of the time has been a hell of a lot of fun."