Trivia: Took the last class ever taught by the great American mathematician Joseph Doob, at the University of Illinois

Favorite Song: Has to be plural. From "Jealous Guy" by John Lennon to "The Wild Wild Sea" by Sting to "Midnight Song" from Mahler's Third Symphony

When did you first discover an interest in applied mathematics? 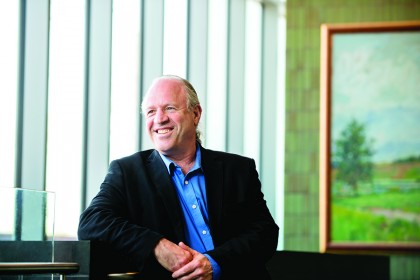 Like many in my generation, I spent a lot of time playing card games and games with dice. When I was about 9 or 10 my dad showed me a table of the odds of being dealt various poker hands and how the calculations were done. My neighbor and I would devise baseball board games in which the chances of various things happening were realistic. I had a great teacher in fifth grade who taught me algebra, and soon after that I decided that all I wanted in life was to learn more about mathematics.

What was your dissertation about?

It was called "Optimal Simultaneous Confidence Bounds" and addressed the multiple-testing problem. For example, if you have several stock traders, despite the fact that none of them has any real insight, one of them appears to be a super-performer. The chance of seeing that apparent super-performer only by chance is larger the more traders you consider. So before you decide to give this person all of your hard-earned money, your evaluation of his or her performance should take into account the size of the set being evaluated.

Is it true that you have a formulation named after you?

It's true. In my first decade at Johns Hopkins, I exploited some beautiful links between the multiple-testing problem and the geometry of "tubes." The research ultimately led to Naiman's inequality, which says something to the effect that if you fill up a special type of garden hose with water, the amount of water is greatest when the hose is straightened out. Unfortunately, what I mean by "special" is kind of technical. The hose is assumed to have spherical caps, can self-intersect, and can live in a sphere of any dimension. Unlike a garden hose.

Are the shapes of things considered mathematical?

Yes! Several of the most important ideas in statistical hypothesis testing and statistical estimation are rooted in geometry.

How long have you been at Johns Hopkins?

Since 1982. I found the interdisciplinary profile of the Johns Hopkins applied mathematics department to be very attractive because I didn't want to be pigeonholed, and I was excited at the prospect of having colleagues with broad interests and backgrounds.

How has your work changed and developed here?

My background in multiple testing led naturally to doing some work in statistical genetics and bioinformatics because we are searching among many possible genes for links to disease. Massive computing power has made us rely more heavily on brute-force computation. In multiple testing, we use something called Monte Carlo simulation to say something about finding what appear to be significant patterns by chance alone. Think about determining how likely it is that when you search a haystack, you find a needle in it. To answer this question, you repeatedly hide a needle in the haystack and then determine whether your search procedure finds that needle. Importantly, instead of using real needles and haystacks, we devise mathematical models that describe what's going on and play our hide and seek game on the computer a huge number of times, almost effortlessly.

Rumor has it that you moonlight as a musician.

I do! I have been playing saxophone since I was about 15 and electric bass for the past 14 years or so. I play with a band called the Stone Hill All-Stars.

What kind of connection do you see between mathematics and music?

Both are very intuitive. Both involve structures. You learn basic structures and to manipulate and link them together in various ways. There's an aesthetic to both of them, as well. The biggest difference seems to be how hard it is to make a living at music.

What does the Q stand for?

Daniel Q. Naiman chairs the Department of Applied Mathematics and Statistics in the Whiting School of Engineering, where he is a professor.